University programs go along with art exhibition of Mary in Washington 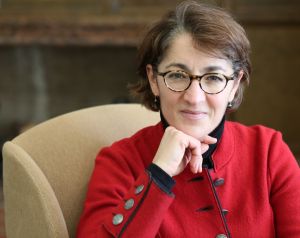 Nora Heimann, associate professor of art history at The Catholic University of America in Washington, is pictured in late November while discussing an exhibit featuring Mary in an interview with Catholic News Service. (CNS photo/Chaz Muth)

WASHINGTON (CNS) — A current exhibition depicting images of Mary by Renaissance and Baroque artists does not stop at the walls of the Washington’s National Museum of Women in the Arts.

The Catholic University of America has developed a number of programs to go along with the exhibition “Picturing Mary: Woman, Mother, Idea,” which will be on display from Dec. 5 to April 12.

“Students and faculty from across our campus — theologians, art historians, actors and playwrights, musicologists, historians and scholars of literature — are all excited to explore the enduring relevance of Mary’s inspiration, while at the same time seeking to enhance understanding of the historic works in this show,” said Nora Heimann, chair of Catholic University’s art department and associate professor of art history.

Heimann said she was invited to a meeting years ago to “imagine what we could do to collaborate” with the museum on the unique exhibit.

“To be invited to do this is really thrilling,” she told Catholic News Service, adding that many of the university’s departments came up with ideas to go along with the special exhibit of more than 60 works of art from well-known Renaissance and Baroque artists, including Botticelli, Michelangelo, Durer, Titian, Rembrandt and Caravaggio.

The museum and Catholic University will co-host a graduate student conference in March 2015 featuring Miri Rubin as the keynote speaker. Rubin, author of “Mother of God: A History of the Virgin Mary,” is a professor of medieval and early modern history and head of the School of History, Queen Mary University of London.

Other Catholic University-sponsored events offered next spring will include:

— A series of lectures by the School of Theology and Religious Studies on the exhibit’s themes.– Presentations by the drama department on several short pieces about Mary from the late-medieval Corpus Christi plays.

— Readings of Marian poems presented by faculty and students in the modern and medieval language of their origin.

“I love the idea that people attending CUA’s programs can come to the museum and see firsthand how Mary’s powerful presence in liturgy, literature, music, and theater is echoed in the visual arts,” said Kathryn Wat, chief curator at the National Museum of Women in the Arts.

She said the drama of a Corpus Christi play featuring Mary and the beauty of an image of Mary “painted with lapis lazuli and gold both speak to her inspirational power.”

Wat also pointed out that since the exhibition specifically centers on how Mary was depicted in Western Europe from the 14th through 17th centuries, people will gain additional perspectives on her through Catholic University’s programs.

These programs also will help the exhibition “make the case for Mary’s profound cultural impact,” she added.

NEXT: Sacred and human: New Washington art exhibit shows both sides of Mary