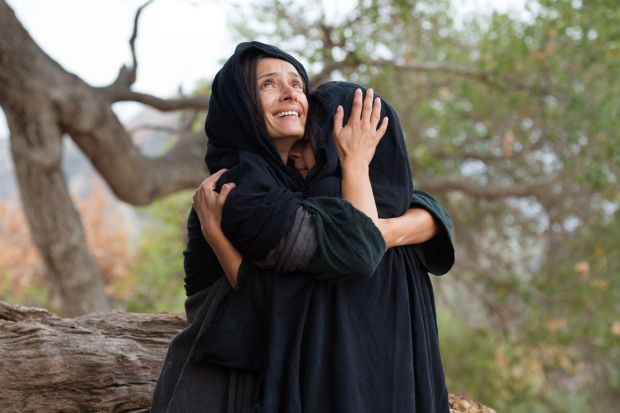 Bahia Haifi Gold stars as Mary in a scene from the movie "Full of Grace." (CNS photo/courtesy Full of Grace)

COLORADO SPRINGS, Colo. (CNS) — A film director raised in Longmont is taking on Mary’s story with a new film in production in Hollywood.

“She was the first one to say ‘Yes’ to Christ, to take on this whole idea of being the Mother of all of us. It’s all about that encounter, that first time you met Christ. It’s different for everybody,” said Andrew Hyatt, writer and director.

“A lot of this film is a reflection on this moment, how that has carried out to help us all to remember that moment, why did we end up here as Catholics doing what we’re doing,” he told The Colorado Catholic Herald, newspaper of the Colorado Springs Diocese. “We made a choice to say ‘Yes’ to Christ, just like Mary did.”

“Ours is the first biblical-era film to shoot in Southern California since ‘The Ten Commandments,'” Hyatt said.

Outside da Box, in association with Justin Bell Productions and ReKon Productions, started filming “Full of Grace” Oct. 27. The film uses authentic casting, with many Middle Eastern actors in its principal character roles.

“It’s a really intimate reflection on Mary a good decade or so after Jesus’ death and resurrection,” said Eric Groth, executive producer for Outside da Box, a not-for-profit film company of 12 years based outside of Chicago. The company has filmed at least 120 short movies for religious education across the country. 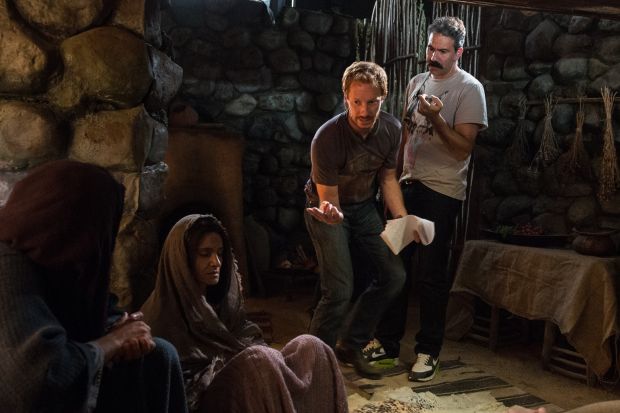 Andrew Hyatt, writer and director of the movie “Full of Grace,” gestures on the set. (CNS photo/courtesy Full of Grace)

While Scripture did not detail many of the final years of Mary’s life, the film seeks to fill in the gaps by imagining what likely would have been her associations prior to her assumption into heaven. It is, filmmakers said, an exploration of the years after Christ’s resurrection and follows the life of his mother, Mary of Nazareth, in her final earthly hours.

In a statement, the film company described it this way: “The followers of Jesus, his disciples, have spent a decade traveling the world telling everyone about what happened to their lives after meeting Christ. Challenged by life and circumstances, they have returned to say their final goodbyes to a woman who would be revered as the mother of God. Mary challenges and encourages these men to see reality in a dramatic new way.”

“In the film we wanted to tell a beautiful story where we can continue to reflect on her role in the church, and on her as the Blessed Mother,” Groth said. After Jesus had died and rose, he said, “the apostles wanted to stay connected to her. We really wanted to continue on that story and imagine what it would have been like for Mary to be reminding the apostles of their first call.”

“She’s one of the most well-known, remarkable women in history,” Hyatt said. “No one’s ever talked about her last days on earth. It’s kind of this beautiful, reflective way of looking back on her life, on her imparting wisdom to a few of the apostles who show up to say their goodbyes. It’s going to be something very new. We hope that people receive it well.”

Hyatt, who went to Regis Jesuit High School in the Denver suburb of Aurora, has been in the film industry for nearly 14 years. He attended film school in Los Angeles and worked in film development for nine years with Mpower Pictures, founded by Steve McEveety of “The Passion of the Christ” and “Braveheart” fame.

Hyatt was reminded by his wife that he went to the West Coast to write and he should give that a shot again, he said.

“I’m Catholic and very much committed to my faith, but my stuff tends to be psychological thrillers. Some films are dark, but there’s a certain truth to them that comes to be,” he said. Hyatt was approached by Outside da Box for this film.

“Then we said, ‘Let’s make something beautiful, and artistic and done in a very different way.’ It just happens to be a Bible story,” Hyatt said. “We were very clear with financiers. We said, ‘If we’re going to do this, we’re going to tell a story that’s never been told, we’re going to do something unique. It is going to feel like an art house film.’ The financier and producer signed off.”

Where many biblical-era films shoot in other countries, the producers opted to use local crews and talent to depict the first-century world. It’s a way to recapture the spirit of old Hollywood, Hyatt said.

The film was shot in locations such as Los Angeles’ Bronson Caves, of “Batman” fame, and California’s Malibu Creek State Park, the backdrop of “M*A*S*H” and other film productions.

“We want to explore from a human level, and as we tell stories about this and about these other saints that these people weren’t born with a halo on themselves. These people were called and had to live that out … in the culture they lived in.”

Basquez writes for The Colorado Catholic Herald, newspaper of the Diocese of Colorado Springs.

PREVIOUS: ‘The Theory of Everything’: A story of ‘When Faith Met Science’

NEXT: University programs go along with art exhibition of Mary in Washington