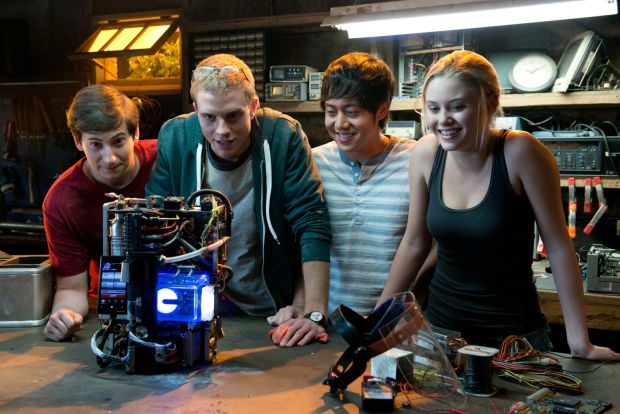 Though obviously aimed at adolescents, this sci-fi fantasy showcases behavior and dialogue that responsible parents would not want their youngsters either to absorb or imitate.

The well-worn theme of time travel gets trotted out once again as MIT-bound high school senior — and science prodigy — David (Jonny Weston) stumbles across the top-secret mechanism his deceased father was developing for the government at the time of his death in a car accident a decade back.

Together with Jesse (Sofia Black-D’Elia), the girl of his dreams, his sister Christina (Virginia Gardiner) and his two best pals, Quinn (Sam Lerner) and Adam (Allen Evangelista), David overcomes a series of obstacles to get the device in working order.

As long as David and company stick to short-term chronology-hopping and relatively small-scale wish fulfillment, their magical gadget seems like a windfall. But pushing the boundaries reveals the disastrously negative impact their reality-altering visits to the past can have on the present.

Director Dean Israelite’s uneven film works well enough while its generic ensemble of characters is puzzling over the nuts and bolts of Dad’s mysterious apparatus. Once they master its secrets, though, the complications become increasingly confusing, and the plotting ever choppier, while the movie’s tone shrills to an annoying crescendo.

The result for viewers might be described as the temporal equivalent of seasickness.

Among the contingencies explored in writers Andrew Deutschmann and Jason Pagan’s screenplay is a possible physical relationship between two characters that would not only predate any thought of marriage but also might anticipate either or both of the participants’ legal majority.

Along the same lines, the whole gang celebrates the success of one of their excursions by merrily downing a round of beers. Yet age 21 is clearly a long way off for any of them.

Throw in the fact that each shock or surprise the youthful pioneers encounter seems to be met with a familiar but unwelcome exclamation that likewise begins with an “s,” and it becomes apparent that this “Almanac” is not a suitable resource for the young.

The film contains a nonmarital and possibly underage sexual situation with a scene of sensual intimacy, teen drinking, some sexual humor, a few uses of profanity as well as pervasive crude and occasional crass language. The Catholic News Service classification is A-III — adults. The Motion Picture Association of America rating is PG-13 — parents strongly cautioned. Some material may be inappropriate for children under 13.

PREVIOUS: ‘Black or White’ explores shadings in issues of race and addiction