‘Black or White’ explores shadings in issues of race and addiction 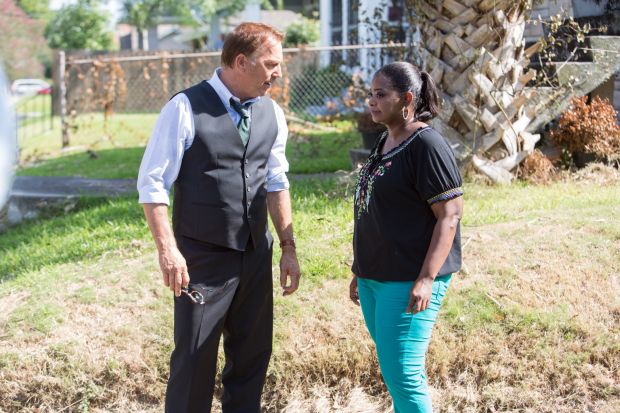 Kevin Costner and Octavia Spencer star in a scene from the movie "Black or White." (CNS photo/Relativity)

Though its avoidance of stereotypes and easy answers is admirable, the film provides only modest entertainment for those grown-up viewers able to appreciate its moral shadings.

After a car accident suddenly leaves him a widower, prosperous white lawyer Elliott Anderson (Kevin Costner) struggles to continue raising his half-African-American granddaughter, Eloise (Jillian Estell). Buttoned-up Elliott finds it difficult to compensate for the absence of his nurturing wife, with whom he had raised Eloise since the girl’s mother, their daughter, died in childbirth.

Additionally, Elliott’s newly developed reliance on alcohol, which he uses to excess to assuage his grief, raises fundamental questions about his fitness as a solo guardian.

In response, Eloise’s paternal grandmother, Rowena Jeffers (Octavia Spencer), sues for custody. A successful entrepreneur in South Central Los Angeles, Rowena is also motivated by her concern that Eloise’s life in one of the city’s upscale suburbs has isolated the child from her black heritage.

So too do racial tensions: Another of Rowena’s children, hotshot attorney Jeremiah (Anthony Mackie), to whom his mom naturally entrusts her case, is determined to portray Elliott as a racist. Elliott’s colleagues, led by his protege, Rick Reynolds (Bill Burr), are equally resolved to play up Reggie’s criminal record. They also deplore the appointment of black Judge Cummins (Paula Newsome) to try the matter.

With personal strengths and weaknesses equally balanced among the characters on both sides, moviegoers’ sympathies are sufficiently divided to keep the proceedings interesting. And some valuable questions are implicitly raised along the way. Why, for instance, should Elliott’s abusive use of booze be legally sanctioned — in his favor, he does habitually avoid driving while drunk — whereas Reggie’s crack smoking inevitably lands him in prison?

Yet, though “Black or White” makes for an intelligent interlude, it fails to register a lasting impact. Perhaps that’s because its generally appealing characters are primarily deployed not as engaging individuals but as stand-ins for recognizable social groups and tendencies.

The film contains brief bloodless violence, a drug theme, incidental affirmation of a same-sex marriage, mature references, several uses of profanity, at least one rough term and frequent crude and crass language. The Catholic News Service classification is A-III — adults. The Motion Picture Association of America rating is PG-13 — parents strongly cautioned. Some material may be inappropriate for children under 13.

NEXT: Time-hopping in ‘Project Almanac’ may leave viewers queasy