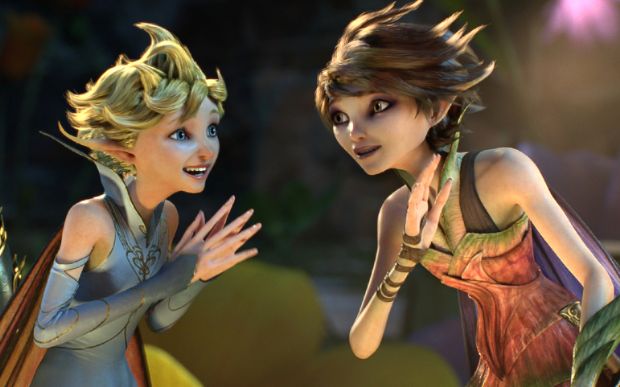 NEW YORK (CNS) — The course of true love never did run smooth, as Shakespeare observed in “A Midsummer Night’s Dream.”

But its progress has never been more confusing than in “Strange Magic” (Disney), an animated riff on the Bard’s classic comedy to which an overlay of the Leafmen and bugs from the 2013 feature “Epic” has been added.

The resulting muddle is made even more untidy when the characters break into pop tunes from across the decades, outbursts that do nothing either to reveal inner emotions or advance the plot.

The story is by George Lucas, who has had considerably more success with space aliens than earthbound romances. As for director and co-writer Gary Rydstrom, together with his script collaborators David Berenbaum and Irene Mecchi, he gets completely lost in this not-so-enchanted forest.

Their fantasy landscape includes two realms: the Fairy Kingdom (most have butterfly wings here) and the gnome-heavy Dark Forest. Princess Marianne (voice of Evan Rachel Wood) of the former dominion wants to marry her vain and hunky suitor, Roland (voice of Sam Palladio), until she sees him kissing another gal. This unsettling sight turns her, for a time, into a surly warrior. But Roland wants her back.

The embittered Bog King wants to prevent anyone falling in love, so he’s imprisoned the Sugar Plum Fairy and has his minions stripping the land of primrose petals, the key ingredient in her amorous brew.

There’s nothing like a few shots of elixir to smooth over plot deficiencies. But Rydstrom insists that everyone get the chance for impassioned “American Idol”-type solos. Though some impressive dance numbers are tossed in as well, seldom have so many visually pleasing images been yoked to such a leaden presentation.

The film contains some intense action sequences. The Catholic News Service classification is A-I — general patronage. The Motion Picture Association of America rating is PG — parental guidance suggested. Some material may not be suitable for children.

NEXT: ‘Black or White’ explores shadings in issues of race and addiction