The comic strip ‘Nancy’: Not old, just classic and timeless 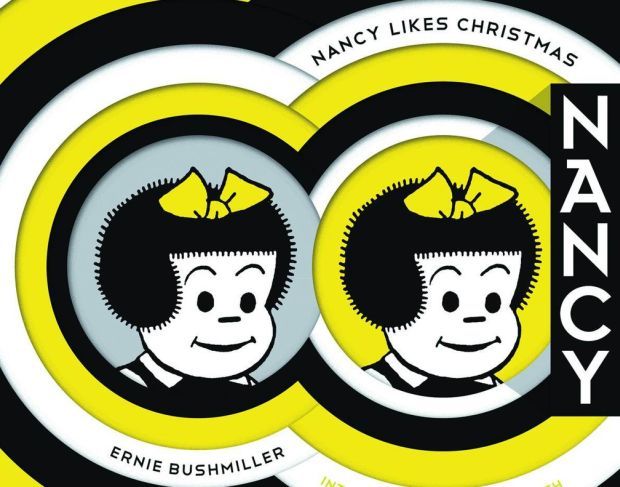 Image from the comic strip "Nancy Likes Christmas." Fantagraphics, a publisher specializing in comics and graphic novels, has been reissuing the complete Bushmiller Nancy in beautiful volumes. (CNS)

NEW YORK (CNS) — Nancy is cool again. While many may only dimly remember her as a mid-20th century comic-strip character, the girl with the dot eyes, Brillo hair and a sidekick named Sluggo has been rediscovered by her genre’s current elite.

Scholar Scott McCloud has offered similarly high praise: “Ernie Bushmiller’s comic strip ‘Nancy’ is a landmark achievement: a comic so simply drawn it can be reduced to the size of a postage stamp and still be legible; an approach so formulaic as to become the very definition of the ‘gag-strip.'”

Fantagraphics, a publisher specializing in comics and graphic novels, has been reissuing the complete Bushmiller “Nancy” in beautiful volumes. (The strip still runs in many newspapers, having been taken over by various artists since Bushmiller’s death in 1982.)

These are charming, ageless strips, lovingly reproduced in black and white and suitable for all ages. Indeed, young children just learning to read would likely find “Nancy” a delightful aid to their efforts.

A lot of the humor in “Nancy” is corny, which is what made the strip seem so square when pensive superheroes and underground hippie comics came to the fore in the 1960s.

Yet, while those once cutting-edge innovations now seem as dated as dancing the frug, “Nancy” still comes across as fresh. The comic successfully taps into universal joke archetypes that transcend not only time but language, which explains why it has remained syndicated — and popular — throughout the world.

One fan called Bushmiller an architect more than a cartoonist. He uses everything in his strip to support the joke — providing the reader with nothing more, but nothing less.

Spare as it is, there’s something mesmerizing about Bushmiller’s art. Like “Peanuts,” “Nancy” skillfully represents life as seen from a child’s view. It uses the minimal essentials to achieve a kind of Platonic perfection.

PREVIOUS: ‘Selma’: A rich tableau of people and their ideas in a troubled time