‘Selma’: A rich tableau of people and their ideas in a troubled time 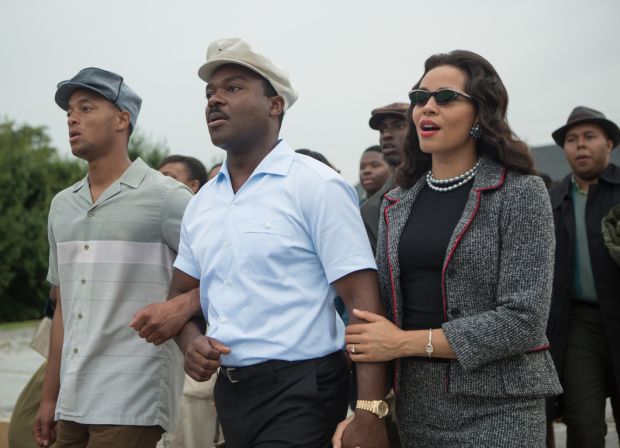 David Oyelowo, center and Carmen Ejogo star in a scene from the movie "Selma." (CNS photo/Paramount)

Adult subject matter, potentially disturbing images and intermittent lapses into vulgar language would normally suggest endorsement of DuVernay’s film for grown-ups only. Yet, when assessed in a holistic way, the movie’s historical value may nonetheless make it acceptable for mature adolescents.

The summer of 1964 saw one of the signal achievements of President Lyndon Johnson’s (Tom Wilkinson) tenure in office: the passage of the Civil Rights Act. Still, as the following year opened, the president was — at least as depicted here — anxious to concentrate on other matters, particularly the economic measures of his Great Society program.

For Rev. Martin Luther King Jr. (David Oyelowo), on the other hand, nothing was more urgent than the drafting of federal legislation that would finally secure access to the ballot box for minority voters in the South.

As a scene featuring activist Annie Lee Cooper (Oprah Winfrey) illustrates, although black citizens had the theoretical right to vote, local authorities had long used absurdly burdensome registration requirements to block them from exercising their suffrage. Nowhere were such underhanded stratagems more effective than in Cooper’s hometown of Selma, Alabama.

With that state’s implacably segregationist governor, George Wallace (Tim Roth), committed to resisting all reform, King agreed to lead a long protest march from Selma to Alabama’s capital city, Montgomery. It would prove to be a portentous decision.

Screenwriter Paul Webb effectively showcases the inspiring rhetoric of the time. But he also provides behind-the-scenes insights into the heated debates over tactics among King and his associates, the toll taken on them by the constant threat of violence under which they were forced to live as well as the emotional burden placed on King’s wife Coretta (Carmen Ejogo) by her spouse’s numerous infidelities.

Despite its apparently narrow focus, the picture presents a richly packed tableau of the era’s characters, organizations and conflicting ideologies. Thus, for younger viewers especially, it can serve as a vibrant and informative look at an epochal period whose effects are still being felt — and assessed — half a century later.

The film contains some harsh violence, an adultery theme, about a half-dozen uses of profanity, a couple of rough terms and occasional crude and crass language. The Catholic News Service classification is A-III — adults. The Motion Picture Association of America rating is PG-13 — parents strongly cautioned. Some material may be inappropriate for children under 13.

PREVIOUS: ‘The Imitation Game’ breaks the code of secrets

NEXT: The comic strip ‘Nancy’: Not old, just classic and timeless