‘The Imitation Game’ breaks the code of secrets 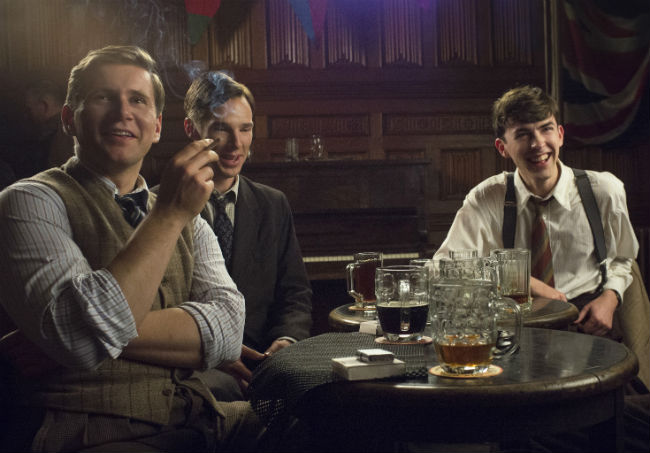 Allen Leech, Benedict Cumberbatch and Matthew Beard star in a scene from the movie "The Imitation Game." The Catholic News Service classification is A-III -- adults. The Motion Picture Association of America rating is PG-13 -- parents strongly cautioned. Some material may be inappropriate for children under 13. (CNS photo/The Weinstein Company)

NEW YORK (CNS) — In the pantheon of dramas about famed mathematician Alan Turing (1912-1954), “The Imitation Game” (Weinstein) is distinctive for its plucky, aphorism-spouting World War II code-breakers, its chocolate-box Bletchley Park setting and its oblique treatment of sexuality.

Cambridge University-educated Turing (Benedict Cumberbatch), a protean figure in the development of computers, has a claim on our attention that Steve Jobs and Bill Gates do not. His work in breaking the Enigma code used by the German military indisputably helped to defeat Hitler and shorten history’s most devastating conflict.

Turing also occupies a prominent place in the annals of the legal prosecution of homosexuality. Arrested in 1952 for “gross indecency,” Turing agreed to undergo hormonal treatments that amounted to chemical castration to avoid imprisonment. His death two years later was ruled a suicide.

Turing’s life and work have already sustained two TV movies: “Breaking the Code” in 1996, based on the eponymous 1986 stage play, and the docudrama “Codebreaker” in 2011.

Any story of Turing’s career, from a moral perspective, consists of opening a series of secretive thematic nesting dolls. The making and breaking of codes for both Allied and Axis forces was a secret; so was the knowledge that Enigma had been “solved.” Similarly, on a personal level, Turing’s attraction to his own sex had to be deeply shrouded.

Which secrets are worth keeping? Who gets to be told? How many lives should be put at risk once the code is cracked?

The film’s big lesson is summarized by Turing in conversation with colleague Joan Clarke (Keira Knightley): “Sometimes it is the people no one imagines anything of who do the things that no one can imagine,” Thus Turing’s success depended on an odd combination of mathematical brilliance, arrogance and a complete lack of interpersonal skills.

As for his sexual secrets, he masks those, at one stage, by announcing that he and Joan are engaged.

Viewers need not buy into a contemporary agenda contrary to Judeo-Christian morality to recognize the tragedy resulting from laws that deprived individuals of their freedom based on private, consensual sexual activity. Unwise at best, such legislation compelled furtiveness and dishonesty rather than cultivating chastity.

In scenes predating his legal woes, Turing’s giant, primitive computer — which he names Christopher — spins its wheels slowly while he and his team fight off impatient bureaucrats insistent on pulling the plug. As they do so, much historical nuance is simply pared away to keep the drama afloat.

Though equally unsubtle, a patriotic archival montage at the end of the picture may leave at least some audience members longing to stand up and wave Union Jacks while singing Dame Vera Lynn’s hit “There’ll Always Be an England.”

The film contains mature themes, including homosexuality, and brief coarse language. The Catholic News Service classification is A-III — adults. The Motion Picture Association of America rating is PG-13 — parents strongly cautioned. Some material may be inappropriate for children under 13.

NEXT: ‘Selma’: A rich tableau of people and their ideas in a troubled time