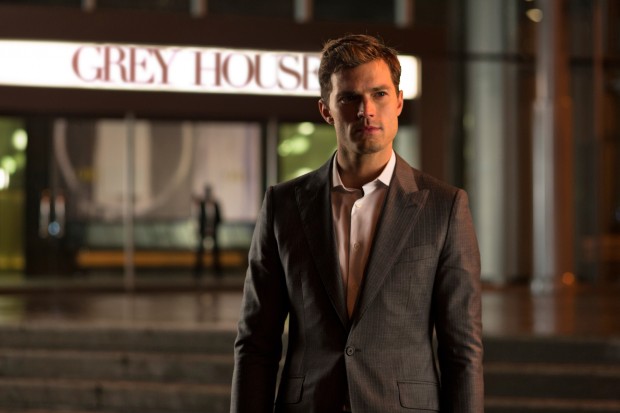 Jamie Dornan stars in a scene from the movie "Fifty Shades of Grey." (CNS photo/Universal Pictures)

NEW YORK (CNS) — “Lifestyles of the Rich and Perverse” might be a more fitting title for the unusually explicit bedroom drama “Fifty Shades of Grey” (Universal).

Director Sam Taylor-Johnson’s adaptation of the first volume in a trilogy of novels by E.L. James — which features a modern-day Marquis de Sade as its male protagonist — has a pornographically narrow focus and a potentially dangerous message.

The popularity — and notoriety — of James’ fiction is such that moviegoers know from the outset that the stumbling block tripping these two up, as they attempt to tango, will be Christian’s fondness for whips and chains. Thus the duo’s first interaction — which comes about when Ana agrees to fill in for her ailing roommate Kate (Eloise Mumford), a journalism major, by interviewing Christian for the campus newspaper — is loaded down with dramatic irony.

All Ana knows is that Christian has been tapped to deliver the commencement address at her pending graduation. But we’re on to this dungeon-loving Bruce Wayne’s real identity. So his sly double entendres are ever so much fun.

In between the zingers, Ana and Christian fall for each other. Yet, as Ana tries to bond with her aloof new beau, she’s perplexed by his total lack of hearts-and-flowers romanticism. Until, that is, she discovers that he’s an obsessive sadist with an elaborately equipped “playroom” full of pain-inducing gadgets and restraints.

Christian enlightens Ana about all this shortly after relieving her of her virginity in a more conventional interaction. When she first shamefacedly admits to her still-unravished status, he demands wonderingly: “Where have you been?” And the next morning, sure enough, best pal Kate remarks on Ana’s glow.

Though it’s framed in the familiar context of a good girl’s crusade to redeem a naughty boy, Ana’s eventual cooperation with Christian’s perversion — arrived at after much hesitation and the negotiation of a written contract, no less — risks conveying the idea that all women are potentially willing victims of physical abuse and humiliation. We’re also left to wonder what role Christian’s helicopter and fancy penthouse pad play in rendering Ana so tractable.

The fact that the aberrant consequences of her consent are mostly toned down only aggravates the damage this armchair flirtation with the darker aspects of human nature has the ability to inflict.

While responsible viewers might sympathize with Christian’s troubled background, both in childhood and beyond, as well as with his passing acknowledgement of the harmful nature of his proclivities, the intent to stir audiences by teasing a supposed taboo is unmistakable.

Additionally, for those grounded in faith, Ana and Christian’s relationship presents a disturbing case study in the resolute frustration of God’s twin purposes in endowing human beings with the gift of sexuality: Not only is fruitfulness intentionally forestalled in the interest of uncommitted pleasure, spiritual union is displaced for the sake of a disordered exchange of possession and surrender.

The film contains excessive sexual content, including graphic deviant behavior and nonmarital sexual activity with much nudity, a benign view of casual sex and contraception, several uses of rough language and at least one crude term. The Catholic News Service classification is O — morally offensive. The Motion Picture Association of America rating is R — restricted. Under 17 requires accompanying parent or adult guardian.

NEXT: Spiritual memoir traces academic’s path from atheist to Catholic