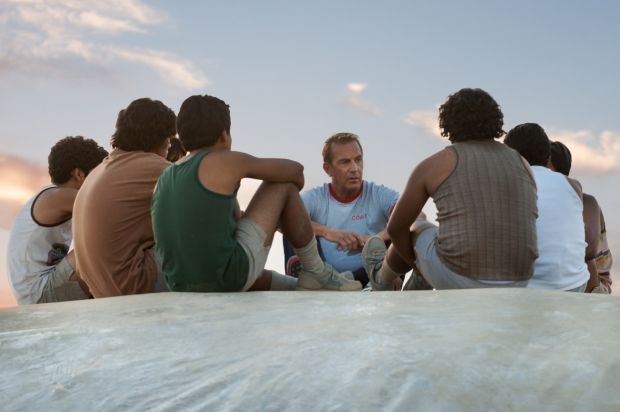 Kevin Costner stars in a scene from the movie "McFarland." (CNS photo/Disney)

As for the story unfolding around him, faith- and family-friendly values — together with the absence of any genuinely problematic elements for parents — make director Niki Caro’s uplifting tale one that can be enthusiastically recommended for moviegoers of almost all ages.

Costner plays Jim White, a high school science teacher and coach in 1980s California whose sharp temper places him on a downward career spiral. Jim, wife Cheryl (Maria Bello) and daughters Julie (Morgan Saylor) and Jamie (Elsie Fisher) seem to have hit rock bottom when the best job he can find forces them to relocate to the impoverished, predominantly Latino fieldworkers’ community of the title.

As the Whites — whose name now takes on an ironic significance — struggle to adjust to McFarland’s Hispanic culture, Jim recognizes a widespread gift among his new students for long-distance running. Toughened by backbreaking agricultural work and constrained to cover extensive distances on foot, lads like Thomas Valles (Carlos Pratts) glide swiftly across the landscape without giving their speed a second thought.

Jim decides to draw on this pool of latent talent by organizing a cross-country team. Since this genre of racing is considered an elite sport for country club-types, Jim and his charges will have to compete against the privileged athletes who attend the Golden State’s private academies. But Jim is convinced that, with the requisite effort, his hearty proteges can prevail.

Caro’s saga of youthful underdogs pitted against the odds honors Jim and Cheryl’s strong marriage, along with the bonds uniting the other close-knit clans it portrays. The script also highlights the value of education and self-improvement.

Though religion mostly hovers in the background, a spontaneous, intense and identifiably Catholic prayer of thanksgiving marks one of the movie’s emotional high-water marks.

The film contains an out-of-wedlock pregnancy, a single mild oath, a couple of crass terms and occasional ethnic slurs. The Catholic News Service classification is A-II — adults and adolescents. The Motion Picture Association of America rating is PG — parental guidance suggested. Some material may not be suitable for children.

NEXT: Cutting the cord: A la carte TV on the way, but not to cable