‘The Matrix’ creators raise up a galactic ‘Wizard of Oz’ 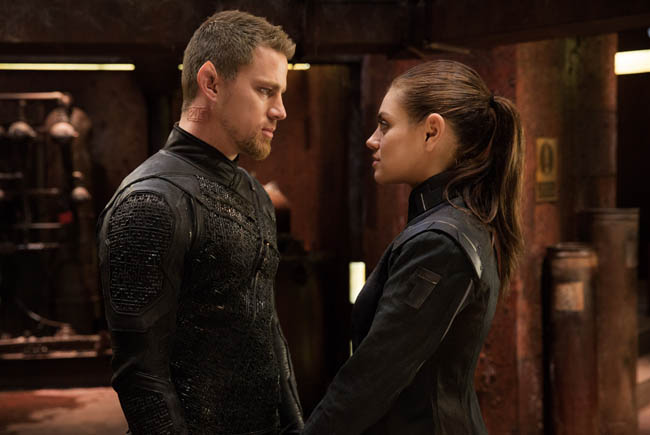 Channing Tatum and Mila Kunis star in a scene from the movie "Jupiter Ascending." The Catholic News Service classification is A-III -- adults. The Motion Picture Association of America rating is PG-13 -- parents strongly cautioned. Some material may be inappropriate for children under 13.(CNS photo/Warner Bros.)

Written and directed by Lana and Andy Wachowski, creators of “The Matrix” trilogy, the film is an action-packed, mythology-laden mash-up of several classic fantasy films, most notably “The Wizard of Oz.”

Instead of Dorothy Gale, we have Jupiter Jones (Mila Kunis), who leaves her drab Chicago home for a grand galactic adventure, guided by a hunky alien, Caine (Channing Tatum), a human-wolf hybrid with pointy ears.

Jupiter finds herself not in Oz but on distant worlds controlled by the royal House of Abrasax. Following the death of the matriarch, three children vie for control of the entire universe. The ruthless elder son, Balem (Eddie Redmayne), conspires against his sister, Kalique (Tuppence Middleton), and playboy brother Titus (Douglas Booth).

In this profoundly non-biblical account, Earth was seeded by the Abrasax eons ago. It now serves as a source of raw material for a magical elixir which keeps the aliens eternally young. In other words, humans are being harvested for food, a la “Soylent Green.”

“Life is an act of consumption,” cackles Balem.

So where does our heroine fit in? Jupiter, although born of human parents, is somehow the heir to the entire shebang, thanks to some reincarnation mumbo-jumbo.

We discover this early on when Caine’s buddy, an astute beekeeper aptly named Stinger (Sean Bean), sees thousands of bees swarm around the young woman.

And how. So Jupiter is swept away by Caine and becomes a pawn in the Abrasax power struggle. This damsel in distress has two goals: Save Earth, and return home to her family in Kansas — er — Chicago.

If this all sounds confusing, and more than a little silly, it is, and much of the film is unintentionally hilarious. The Wachowskis may have strong opinions about industrial might, the abuse of power, and the plight of the individual, but these all get lost in the ether.

The film contains intense but bloodless sci-fi action, partial rear nudity, some innuendo, a benign view towards egg donation, and occasional crude and profane language. The Catholic News Service classification is A-III — adults. The Motion Picture Association of America rating is PG-13 — parents strongly cautioned. Some material may be inappropriate for children under 13.

NEXT: German Catholics assess rise and fall of Nazism