‘Focus’ eyes up the underside of depravity, in a slick package 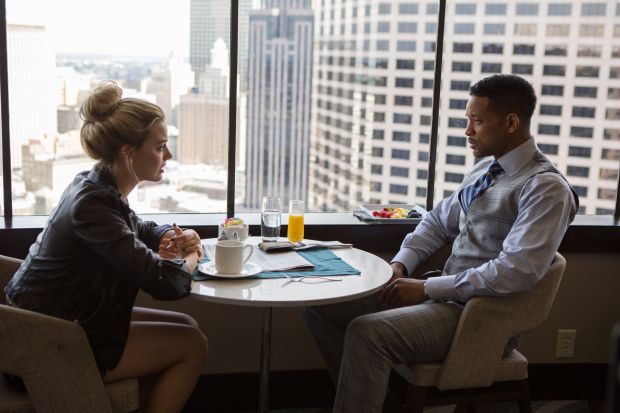 Margot Robbie and Will Smith star in a scene from the movie "Focus." (CNS photo/Warner Bros.)

NEW YORK (CNS) — More than most heist movies, the flimsy crime drama “Focus” (Warner Bros.) glamorizes wrongdoing. Add to that the lax sexual morals and gritty vocabulary of its characters, and the resulting package can be considered suitable for very few.

Directors and co-writers Glenn Ficarra and John Requa’s slick little jaunt through the underworld gets rolling when small-time swindler Jess (Margot Robbie) tries to extort money from a stranger she picks up in a bar. But her ill-chosen victim, Nicky (Will Smith), turns out to be an inveterate and accomplished con man who merely laughs off Jess’ amateurish scheme.

Recognizing Nicky’s superior gifts, Jess begs him to bring her into his gang and, after some hesitation, he agrees. But romance — needless to say, the two fall for each other — and robbery make for a volatile mix, leading to a variety of personal and professional conflicts.

Jess and Nicky eventually become entangled with sleazy car racing big shot Garriga (Rodrigo Santoro), who’s just as corrupt as they are. But their earlier targets are ordinary tourists out for a good time at the Super Bowl in New Orleans.

Though some of these are unfaithful husbands whose ethical lapses make them vulnerable, all of those on whom Jess and Nicky prey are implicitly portrayed, in the frequently trite script, as suckers who deserve what they get.

This fundamentally flawed outlook is accompanied by the occasional interlude of raunchy humor, taken-for-granted premarital physicality and a carpet-bombing campaign of expletives. As a result, not only the young and impressionable but even many grown moviegoers would be well advised to fix their focus elsewhere.