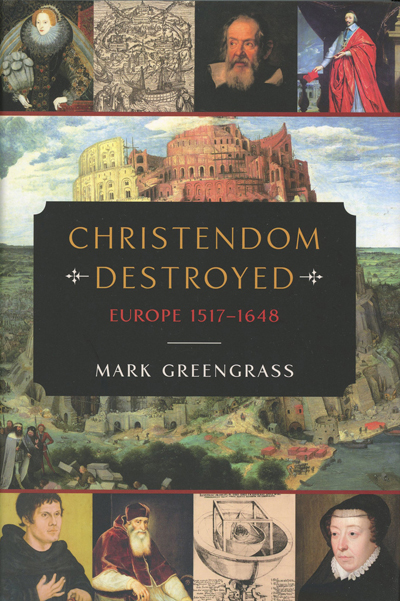 This is the cover of “Christendom Destroyed: Europe 1517-1648” by Mark Greengrass. The book is reviewed by Brian Welter. (CNS)

In “Christendom Destroyed,” Mark Greengrass, a professor emeritus of early modern history at the University of Sheffield, takes readers on a long foray through one of the most tumultuous periods of European and Christian history.

It was a time that determined many present-day assumptions, such as the widespread belief that religion causes war and violence and that toleration of other people’s creeds forms part of a healthy society and personal psychology. The author argues convincingly that the idea of Christendom became universal, as the good news was preached throughout the New World, the Far East and India by various Catholic orders.

Yet the author treats very few of the era’s movers and shakers as self-aware revolutionaries. Recalling the book’s title, he notes that Martin Luther, for instance, aimed to defend Christendom rather than upend it, a somewhat surprising argument for certain Catholics yet one that Greengrass supports carefully. Luther believed that the papacy could no longer be trusted with the keys to Christendom, and that more power had to be retained at the local level.

Luther was following no hidden agenda to create havoc and bring about a revolution. Greengrass quite correctly calls him and many other reformers conservative. They did not wish to end Christendom, but to strengthen the faith and bring it back to its roots. The broad success of Erasmus of Rotterdam’s Greek New Testament in the period testifies to this interest in the past.

As a strength of the book, Greengrass does not boil the era down to the Reformation, nor the Reformation itself down to Luther and the Catholic reaction to him, but places the events in a wider context.

He discusses at length the social and religious situation out of which Luther, John Calvin, England’s Thomas Cranmer and a host of other reformers, Protestant and Catholic, came, as well as wider changes in science and technology.

The pot had been simmering for decades, and Luther was simply the spark in the religious sphere.

As another strength, the author avoids separating good guys from bad guys. He highlights the shortcomings and strengths of all involved, and despite the fact that the heavy historical research on this period means that we have a wealth of information on even minor players in these years, readers will not get lost in all the action, as Greengrass manages the historical narrative quite handily.

Readers familiar with the era will find some necessary rehashing of old observations, such as the importance of the printing press and pamphleteering, above all in Germany, where Luther and his followers were able to put their points of view into the hands of the growing reading classes. Being about eight pages in length, each pamphlet would have been issue-specific, condemning, for instance, indulgences or papal corruption.

Quite correctly terming the Reformation a battle of the books, the author should likewise have characterized it as a lively propaganda war and further studied the communication approaches used.

Despite the desire to preserve the past, the author shows how the new sprang up: “Protestant Europe focused its energies on ‘ministry,’ which was what replaced sacrificial priesthood.” Finding themselves on new ground, the reformers often made things up as they went along.

Yet Greengrass shows that religion was only one sphere of this novelty, as the period’s scientists were busily coming to terms with Copernicus, Galileo and others. He notes the increasingly technological perspective: “Machinery also became a world view,” as such devices as clocks exemplified God’s orderly universe.

Before getting to the religious and political events, Greengrass prepares readers with an overview of this changing intellectual worldview. He previews the pamphleteering of the reformers by discussing a world greedy for the written word: “Knowledge in Christendom had been the preserve of the few, its nature restricted by what constituted science, its circulation constricted by the privileged environments of its acquisition and transmission.”

In this reference to knowledge and the printed word, Greengrass makes the error of projecting his own post-modern values onto the past, being a bit harsh on the “privileged” medieval clerics who in his view hoarded knowledge. In reality, the Reformation and its eruption of information merely continued the unparalleled exchange of books and ideas that had begun centuries before in the monasteries and then in Europe’s universities under the aegis of the truth-loving church.

While the author treats this history fairly enough, such slips do reflect the need for Catholics to write more of their own history.

NEXT: ‘Focus’ eyes up the underside of depravity, in a slick package