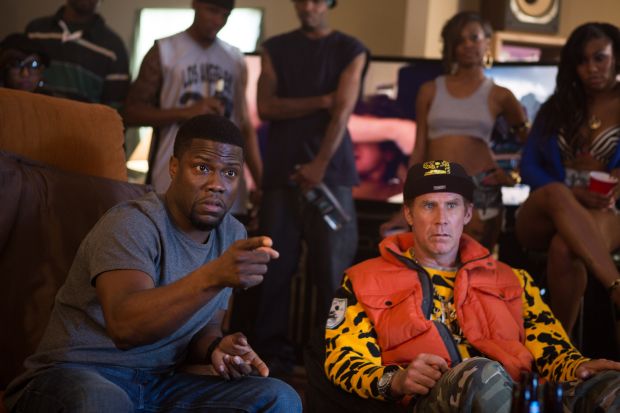 Kevin Hart and Will Ferrell star in a scene from the movie "Get Hard." (CNS photo/Warner Bros.)

NEW YORK (CNS) — In lieu of a movie ticket for the shoddy prison-themed comedy “Get Hard” (Warner Bros.), potential viewers should treat themselves to a “Get Out of Jail Free” card.

Like Mr. Monopoly joyfully springing the coop of his birdcage, they’ll be escaping a 100-minute confinement within a dank, moldy cell of tasteless humor.

The sophomoric level at which director Etan Cohen’s proceedings are pitched can be gauged from the opening scenes which feature — if that’s the word — repeated visuals of a nude Will Ferrell viewed from behind.

As Ferrell goes through his character’s morning exercise routine au naturel, we’re meant to giggle at the awkward sight of his untanned and untoned body.

Ferrell plays financially successful but socially clueless Los Angeles fund manager James — the many deluxe accoutrements of whose lifestyle, it seems, do not include a last name.

A complete moniker aside, James would seem to have it all: a cushy job at which he excels, a lavish home that’s soon to be replaced by a still more pretentious estate and a fetching live-in fiance, Alissa (Alison Brie). To make matters even better for James, Alissa just happens to be his admiring boss Martin’s (Craig T. Nelson) daughter.

Such bliss is not destined to last, however, as James suddenly finds himself framed for embezzlement and sentenced to 10 years hard time at San Quentin. Consumed with fear of what life will be like on the inside, James desperately offers to pay Darnell (Kevin Hart), the small-business man who runs the carwash service he uses, to train him in the skills he’ll need to survive the experience.

Despite James’ blatantly racist assumption that, simply because he’s black, Darnell must have spent time behind bars, his new mentor is in fact a squeaky clean family man. But Darnell does need the money James is willing to shell out. So their arrangement goes forward in what purports to be a laugh riot of fish-out-of-water antics.

Jay Martel and Ian Roberts’ script wrong-headedly tries to turn James’ fear of being raped into a laughing matter. Their screenplay proves equally misguided in its unsuccessful aspirations to comment on contemporary economic and racial divides. The result will leave audiences longing for early parole.

The film contains strong sexual content — including full nudity and the preliminaries of a perverse act — a frivolous treatment of homosexuality and rape, a couple of uses of profanity and pervasive rough and crude language. The Catholic News Service classification is O — morally offensive. The Motion Picture Association of America rating is R — restricted. Under 17 requires accompanying parent or adult guardian.

PREVIOUS: Filmmaker writes more about own faith journey than about Mother Teresa

NEXT: Movie review: It Follows