Filmmaker writes more about own faith journey than about Mother Teresa 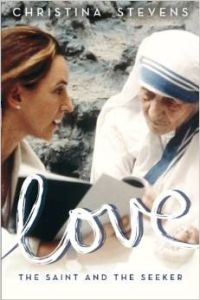 Everyone is on a journey to somewhere for something or someone. For Catholics, it is commonly known as a “faith journey” in which we, to quote the Baltimore Catechism, were created to “show forth (God’s) goodness and to share with us his everlasting happiness in heaven.”

In “Love: The Saint and the Seeker,” her first book for adults, Christina Stevens chronicles her journey — a response to a dream that took her to Kolkata, India, in 1994 to meet and convince Mother Teresa to be filmed. If journeys were so simple, Stevens’ story would have been reduced to a pamphlet, or a pocket guide at most.

An award-winning filmmaker, Stevens intertwines her life story with the journey to Mother Teresa. In vivid detail — detail that makes her story languish — she writes of her childhood in Australia as the daughter of an abusive father and alcoholic mother, her close relationship with her brother who died unexpectedly as a young adult, leaving a wife and four children. She writes about her love of flying old planes, her relationships and acclaimed creative work.

For Stevens, writing her life story may have been cathartic, maybe even interesting for her and those who know her. None of it, however, is as interesting as her pursuit in getting Mother Teresa to agree to be filmed. Stevens’ investment of time, energy and money in doing this, even though she had been told by a Missionary of Charity, “Don’t come” to Kolkata, is a leap of faith.

Where the reader will appreciate the detail is in Stevens narrating her three weeks in Kolkata as she worked in one of Mother Teresa’s orphanages and in one of her homes for the dying, and scouted locations for shooting despite not having agreement from the subject herself. Turned down by Mother Teresa twice, Stevens tried again — and the blessed one agreed.

With a very expensive crew and equipment and 15 minutes to shoot, Stevens gets the audio and video she seeks.

The story intensifies as she transports film back to the United States in hopes that there was something usable. She awaits word from editors as to whether or not the nun’s voice is audible amid the noise of the city. She is hopeful that, despite fading sunlight on the day of the shoot, the film caught what she needed.

Stevens is successful in both regards. The result is a two-minute video titled “Revolution of Love” that aired on various TV outlets.

A welcome relief from the rambling manner in which Stevens relates her story is the inclusion of short, italicized sentences, inspired, according to the author, “by the teachings of Mother Teresa” that are interspersed throughout the book. These serve as an opportunity for the reader to reflect upon the wisdom and holiness of the blessed one.

Because in “Love” one gets to know more about Stevens than about Mother Teresa, this book doesn’t have the stature of many of the books written about the nun, e.g., “Mother Teresa: A Complete Authorized Biography,” the 1997 work by Katherine Spink, or “Mother Teresa of Calcutta: A Personal Portrait,” written by her spiritual director, Father Leo Maasburg in 2012.

Nonetheless, readers who enjoy reading people’s journeys of faith, no matter who the subject is, will like “Love.” As Stevens writes in the prelude, she prays that “by leaping into my life, you may enrich and honor your own even more.”

Olszewski is general manager of the Catholic Herald, publication serving the Catholic community in southeastern Wisconsin.

NEXT: Movie review: Get Hard