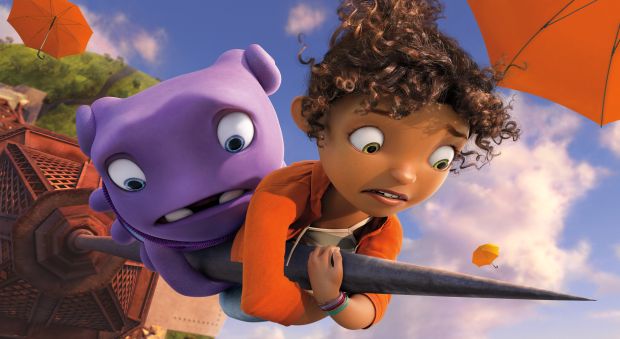 NEW YORK (CNS) — Parents looking for acceptable Easter-break entertainment for the kids will probably be satisfied with the lightweight animated adventure “Home” (Fox).

Whether viewers young or old will remember anything about this merely passable picture by the time Pentecost rolls around, however, is another question.

At the center of the movie’s unimpeachable — if uninspired — proceedings stands cuddly alien Oh (voice of Jim Parsons). Imagine a marshmallow dipped in purple dye and endowed with an air of innocent enthusiasm, and you have a pretty accurate portrait of this amiable space traveler.

Sprung from a race of intergalactic migrants called the Boov, Oh comes to Earth as part of a peaceful Boovian invasion during which the planet’s human inhabitants are exiled to Australia. The newcomers, meanwhile, gently but determinedly commandeer the remainder of the orb for themselves.

Led by a cowardly nitwit called Captain Smek (voiced by Steve Martin), the Boov — whose fractured version of English will provoke a few smiles — are consummate conformists. Yet Oh is a free spirit. Oh also craves the kind of relationships his fellow Boov characteristically avoid.

This makes him an unwelcome misfit in their ranks. So much so, that his presence is universally greeted with a groaning version of the disappointed exclamation that has stuck to him as his name.

Oh’s desire for companionship leads him to throw a housewarming party to which he inadvertently invites just about everyone in the universe, including the Boov’s fearsome archenemy, the Gorg. (Any moviegoer who has ever made a mess of things by accidentally hitting “reply all” will sympathize with Oh’s plight.)

Forced to go on the run, Oh crosses paths — and eventually joins forces — with Tip (voice of Rihanna), a preteen who managed to evade compulsory relocation. As Oh works to forestall the worst consequences of his misstep and Tip tries to reunite with her displaced mom, Lucy (voice of Jennifer Lopez), director Tim Johnson’s screen version of Adam Rex’s novel “The True Meaning of Smekday” charts the ups-and-downs of their tentative friendship.

Along with the individuality and sociability embodied by Oh, screenwriters Tom J. Astle and Matt Ember extol courageous risk-taking. They also point out the rewards of overcoming prejudice.

Though hardly a cinematic dwelling to which viewers will long to return, “Home” is diverting enough to serve as a temporary shelter for those in search of a family-friendly outing over a holiday weekend.

The film contains occasional scenes of peril and a bit of mild bathroom humor. The Catholic News Service classification is A-I — general patronage. The Motion Picture Association of America rating is PG — parental guidance suggested. Some material may not be suitable for children.

PREVIOUS: Too big to fail? Supersized cable bundles lose their hold on viewers

NEXT: Filmmaker writes more about own faith journey than about Mother Teresa