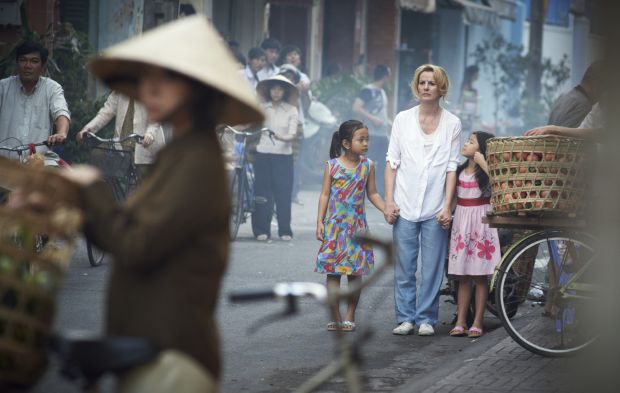 Deirdre O'Kane, with children, stars in a scene from the movie "Noble." The film, which will debut on 150 screens nationwide May 8, tells the story of an Irish woman with an indomitable spirit who years after raising her own children went to Vietnam to help orphans. (CNS photo/Aspiration Media)

WASHINGTON (CNS) — “Noble,” which will debut on 150 screens nationwide May 8, tells the story of an Irish woman with an indomitable spirit.

It took another Irish woman with the same kind of spirit to make the movie.

Deirdre O’Kane said it took six years from idea to finished form to tell the story of Christina Noble, who has spent the past 26 years in Vietnam helping the nation’s orphans and abandoned children.

Noble’s story is riveting stuff. The youngest child of a large brood in a slum in post-World War II Dublin, her mother suffers from consumption and her father is an alcoholic who can’t keep a job. Even though she and her siblings are truants from school, Christina gets by with a great singing voice for one so young, as well as frequent chats with God.

If only that were as bad as this true story gets. Mom dies and the court splits up the children. Christina is sent to a convent orphanage. When she gets old and wily enough, she escapes and finds work in a small factory. But she is impregnated in a gang rape and unknowingly signs away her right to keep her baby at a second convent orphanage.

Christina makes her way to Birmingham, England, where she falls in love with a young Italian who buys the fish and chips shop where she works. But after bearing him three children, she learns her husband is cheating on her. She packs up the kids and moves to London.

Watching the “telly,” Christina sees a news report about a country she’d never heard of before: Vietnam. She has dreams about Vietnam. After raising her children to adulthood, she makes the trek to Vietnam, not knowing exactly what she will do but knowing she will be doing something.

Noble’s work with Vietnamese orphans — the number at last count was estimated at 70,000 since 1989 — has won her recognition from the British and Vietnamese governments.

But, according to O’Kane, “to a younger generation, I don’t think they would have known her. That’s why I thought it was a very good idea to make the film.”

For O’Kane, “I first came across her when I read her book. That was 20 years ago. She’s got two books written. I read them both. I was 25 years old. I was fairly profoundly affected by the book. I knew that I would encounter her somehow. I thought maybe I would end up volunteering for the (Christina Noble) Foundation.”

As it turned out, O’Kane, who started as a standup comic, was asked to emcee a fundraiser for the foundation. “It was meant to be a one-off, but I hosted every one for the next five years,” she said. It was only at the last one where O’Kane was able to corner Nobel briefly and tell her that her life story would make a good movie. O’Kane said Noble was wary about the film’s tone but ultimately consented.

The script took two years to craft, and even so, was rearranged in the editing room after filming. It helped that O’Kane’s husband, Stephen Bradley, was the film’s writer and director.

O’Kane took on the role of the adult Christina, but told Catholic News Service in an April 20 telephone interview from London, “I remember thinking if I had to back down (for an A-list star), I will back down, because making the picture is more important. I got lucky.”

Much of the filming was done in Vietnam, which was in itself an adventure because the country “had no film infrastructure,” O’Kane said. “We relied on a lot of goodwill.”

There was one scene where even O’Kane’s husband confessed he could not be assured of its outcome. “I have no idea what’s coming down this street,” he said of a street scene meant to evoke 1989-era Vietnam). “Then like a miracle — like a miracle — time stood still and cars and clothes and people from 1989 appeared.”

While the movie shows Christina Noble talking to God in church settings, O’Kane reported that “Christina talks to God all the time. She picks up the phone to speak to God. I’ve seen her do that in her own house. She has a very personal relationship with God, and she’ll talk to him anywhere, anytime.”