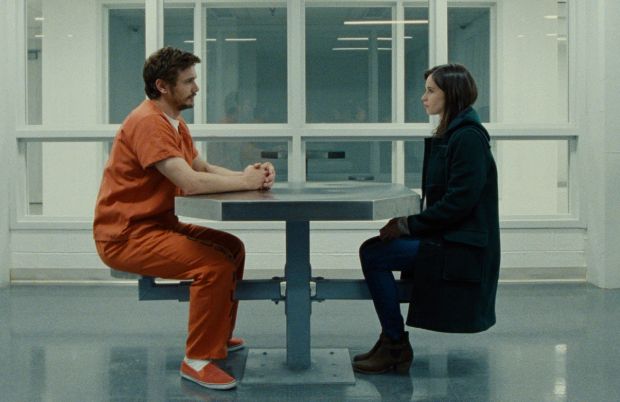 James Franco and Felicity Jones star in a scene from the movie "True Story." (CNS photo/Fox)

NEW YORK (CNS) — Crime and punishment are at the heart of “True Story” (Fox), a detailed dissection of a real-life murder case.

The grisly undertones of this whodunit — adapted by director and co-writer (with David Kajganich) Rupert Goold from the memoir by Michael Finkel — make it appropriate for mature viewers only. Yet, for those able to endure its seamier aspects, the film provides a cautionary tale about narcissism and the perils of seeking fame and fortune through the misdeeds of others.

In 2002, Christian Longo (James Franco) is arrested in Mexico and charged with the murder of his wife and three small children back in Oregon. When found, Longo is inexplicably impersonating Finkel (Jonah Hill), a former reporter for The New York Times.

Dismissed from the Times the year before for manipulating the details of an article about the African slave trade, Finkel had retreated to Montana with his wife, Jill (Felicity Jones). By the time of Longo’s detention, Finkel is hard up and worried about his future.

Suspecting there’s a juicy story in Longo’s deception, Finkel arranges a meeting with the ex-fugitive. Their unexpected rapport is instant — and mildly creepy.

What ensues is mutual manipulation. Longo, slimy yet charismatic, seeks a sympathetic ear as he insistently asserts his innocence with such preposterous lines as, “Sometimes the truth isn’t believable. But that doesn’t mean that it’s not true.”

Wide-eyed and surprisingly naive, Finkel grows ever more excited at the prospect of writing a best-selling book about the ultimate vindication of a wrongly accused suspect. Jill, however, is increasingly alarmed by her husband’s unaccountable — and potentially damaging — obsession.

Goold is fond of tight close-ups and ambiguous expressions which certainly keep the audience guessing as Longo’s trial approaches.

The film contains disturbing images of death and some profane and crude language. The Catholic News Service classification is A-III — adults. The Motion Picture Association of America rating is R — restricted. Under 17 requires accompanying parent or adult guardian.

PREVIOUS: If a friend invites you to ‘Unfriended,’ click ‘unfriend’