‘Pitch Perfect 2:’ Catchy songs but a tin ear for dialogue 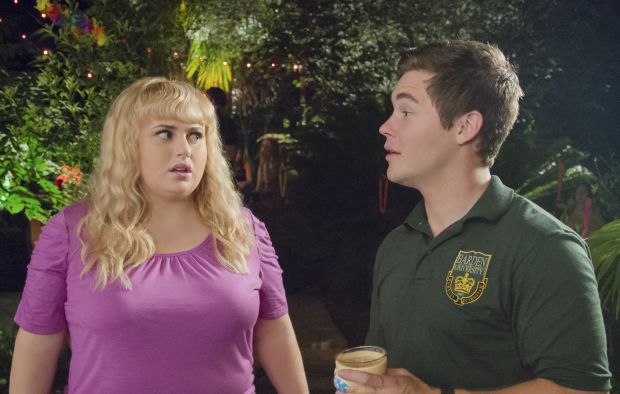 Rebel Wilson and Adam DeVine star in a scene from the movie "Pitch Perfect 2." (CNS photo/Universal)

NEW YORK (CNS) — The Bellas are back and singing their hearts out in “Pitch Perfect 2” (Universal), the ongoing trials and tribulations of a college a capella group.

Elizabeth Banks, who reprises her role of snarky pageant official Gail, serves as director and co-producer of this sequel, which essentially follows the same template as the 2012 original. That means spirited musical numbers in the name of sisterhood (and landing a boyfriend), but also, regrettably, bawdy language, off-color humor, and sexual innuendo.

We return to the fictional Barden University, where members of the Bellas are now seniors and ready to graduate. Having won the national a cappella title, they are invited to perform in Washington, before President Barack Obama and first lady Michelle Obama (shown in a cameo).

The appearance takes a disastrous (and tasteless) turn when Fat Amy (Rebel Wilson) — her preferred name to pre-empt insult — has a wardrobe malfunction and exposes herself to the audience. A scandal erupts, and the Bellas are banned from future competition.

Much soul-searching ensues among the group’s leaders, Beca (Anna Kendrick) and Chloe (Brittany Snow). They discover that the road to redemption lies overseas with the world championships, which no American team has ever won.

With countless references to World War II, the battle is on between the USA and Germany.

Along the way to the showdown in Denmark, the Bellas hone their craft and regain their harmony in sing-offs against male counterparts including a tuneful bunch of real-life Green Bay Packers (don’t ask). They are also inspired by a new recruit, Emily (Hailee Steinfeld), daughter of a former Bella who writes her own songs.

“Pitch Perfect 2” works best when showcasing the catchy songs and not the dialogue, which is shockingly tone deaf. The attempts at humor by belittling women, foreigners and even religion is out of tune with what should be a wholesome anthem for self-improvement and achievement.

The film contains implied nonmarital relationships, adult themes and innuendo, occasional crude language, and an obscene gesture. The Catholic News Service classification is A-III — adults. The Motion Picture Association of America rating is PG-13 — parents strongly cautioned. Some material may be inappropriate for children under 13.

NEXT: ‘Catholicsm’ isn’t so hard after all