‘Catholicsm’ isn’t so hard after all 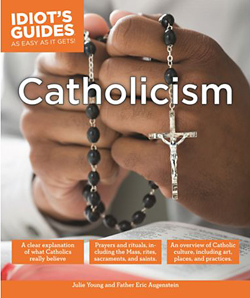 It shares shelf space with such other distinguished titles in the Idiot’s Guides series as “The Catholic Catechism,” “Catholicism for Dummies” and “Catholic Mass for Dummies,” all of which suggest that particular demographic is well catechized.

Flippant title aside, “Catholicism” is a clearly written book, which explains in laymen’s terms what the Catholic Church believes, teaches and doesn’t teach. The particular expertise of the two authors are complementary. Young holds a degree in writing from St. Mary of the Woods College and has written for a number of Catholic publications. Father Augustein, who is vocations director for the Archdiocese of Indianapolis, holds degrees in philosophy and theology from La Salle University and St. Meinrad School of Theology.

The book is broken down into 22 chapters over five parts: “What is Catholicism;” “The Sacramental Life;” “Living the Good Life;” Prayer and Holiness” and “Catholic Life and Culture.”

The writing is unquestionably orthodox in presentation yet in ways one might not have considered. For example the simple explanation of original sin as it is inherited from our first parents, refers “to people’s natural inclination to reject the will of God in favor of their own selfish desires and personal satisfaction.”

Breakout factoids and ancient and new quotes help to enliven the text, for example: “Ignorance of the Scripture is ignorance of Christ – St. Jerome;” “In the London betting houses I was in 44th place. Look at that. The one who bet on me won a lot, of course – Pope Francis.”

In another quote from Francis further in the text, the Holy Father comments, “The Internet, in particular, offers immense possibilities for encounter and solidarity. This is something truly good, a gift from God.”

In its coverage of all things Catholic, the book is indeed thorough, to the point of overkill. Devoting 10 pages to a list of the popes of the Catholic Church is a bit much, unless the authors were paid by the word.

With that quibble aside, Idiot’s Guides, “Catholicism” would be a great supplemental reading for anyone considering entering the faith, good for catechumens and catechists alike. Also it could make lively discussion for parish study groups, no matter what the participants’ foundational catechesis.

NEXT: Movie review: The Water Diviner