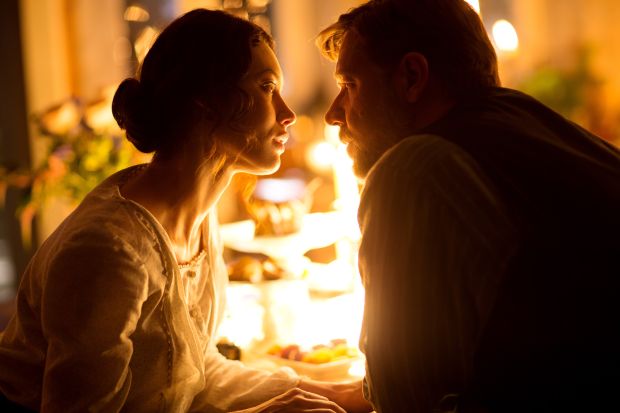 Olga Kurylenko and Russell Crowe star in a scene from the movie "The Water Diviner." (CNS photo/Warner Bros.)

NEW YORK (CNS) — A father copes with the loss of his three sons during World War I in “The Water Diviner” (Warner Bros.), a fictional drama inspired by true events.

The story centers on the aftermath of the Battle of Gallipoli, fought in 1915 in the former Ottoman Empire (modern-day Turkey). More than 100,000 soldiers died as the Ottomans defeated the invading Allied troops, including 35,000 from far-off Australia and New Zealand.

The Gallipoli tragedy is deeply felt to this day in these two nations, as resonant as Pearl Harbor has been to Americans.

Against this background, Russell Crowe makes his directorial debut, and also stars as Joshua Connor, an Australian farmer with a unique gift: He can locate water beneath the most barren of landscapes.

At war’s end, Connor receives the personal effects of his three sons who perished together at Gallipoli: Arthur (Ryan Corr), Edward (James Fraser), and Henry (Ben O’Toole). He is determined to travel halfway across the world to retrieve their bodies and bring them home.

His distraught wife, Eliza (Jacqueline McKenzie), blames Connor for their sons’ deaths, as he allowed them to enlist in the first place. When she commits suicide, Connor has no reason not to undertake the arduous journey, so they may be buried beside their mother.

Arriving by boat in Istanbul, Connor meets a rambunctious street boy, Orhan (Dylan Georgiades), who leads him to the family business, a rundown hotel. His mother, Ayshe (Olga Kurylenko), is not pleased to meet “the enemy,” especially as her husband fought at Gallipoli and, now missing, is presumed dead.

Connor runs up against more resistance and red tape from military authorities who don’t want a civilian meddling in postwar affairs.

Undeterred, he makes his way to the battlefield. There he finds an unexpected ally in Major Hasan (Yilmaz Erdogan), a Turkish official who presided over the Gallipoli victory.

Hasan takes pity on Connor, mindful of Turkish losses in the battle. In a gesture of reconciliation, he decides to help the foreigner.

“Why change everything for one father who can’t stay put?” asks the Australian official on duty, Col. Hughes (Jai Courtney).

“Because he is the only father who came looking,” replies Major Hasan.

And so, two former enemies unite in an epic quest, aided by Connor’s uncanny knack for finding hidden things.

In the meantime, back at the hotel, Ayshe’s hard heart softens, and she longs for the handsome foreigner’s safe return.

Crowe’s direction is masterful, and the cinematography stunning. Although the screenplay by Andrew Knight and Andrew Anastacios strains credibility (bordering at times on the preposterous), “The Water Diviner” nonetheless offers a timely reminder of the ghastly personal cost of war and its lingering impact upon future generations.

The film contains bloody war violence and disturbing images of death, and an unflattering portrayal of a Catholic priest. The Catholic News Service classification is A-III — adults. The Motion Picture Association of America rating is R — restricted. Under 17 requires accompanying parent or adult guardian.

PREVIOUS: ‘Catholicsm’ isn’t so hard after all