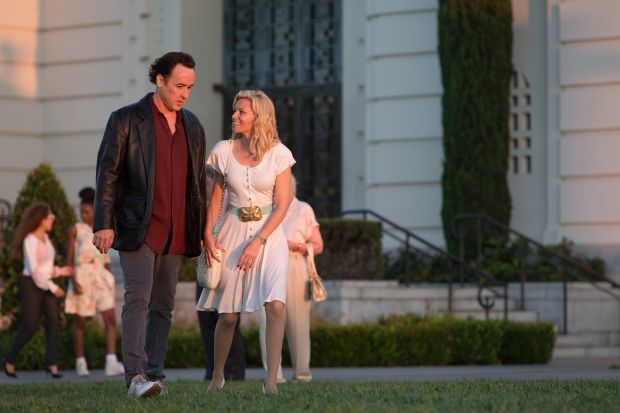 John Cusack and Elizabeth Banks star in a scene from the movie "Love & Mercy." The Catholic News Service classification is A-III -- adults. The Motion Picture Association of America rating is PG-13 -- parents strongly cautioned. Some material may be inappropriate for children under 13. (CNS photo/Roadside Attractions) See MOVIE REVIEW June 10, 2015.

When this reliable template is applied to the biographies of pop-culture stars, however, what typically occurs — especially if the subject is still living — is a descent into sentimental gloss and too many references to the lead character as a charismatic genius.

Fortunately, in “Love & Mercy” (Roadside), a profile of Brian Wilson, the driving force behind 1960s chart toppers the Beach Boys, director Bill Pohlad has managed to evade this trap. He focuses instead on lengthy scenes showing the young Wilson (Paul Dano) laboriously crafting his distinctive sound in recording studios. It’s an intelligent, steady approach, almost like that of a documentary.

Whether screenwriters Oren Moverman and Michael Lerner bring a documentarian’s faithfulness to real life to bear throughout their script is, however, another question. Were, for instance, Wilson’s bandmates — his brothers Carl (Brett Davern) and Dennis (Kenny Wormald) along with cousin Mike Love (Jake Abel) and friend Al Jardine (Graham Rogers) — really so blithe in their cooperation with Wilson’s unique musical notions as the film suggests?

Whatever the facts, there is a refreshing absence of the stale dialogue that usually characterizes musical biopics. Accused by his collaborators of lacking a commercial sensibility, Wilson declares, “I got different stuff inside me. I gotta get it out.”

That “different stuff” included Wilson’s drive to break away from synthetic, clean-cut hits like “California Girls” in favor of more ambitious material — such as that found on the group’s 1966 concept album “Pet Sounds.” Yet it also extended to the auditory hallucinations that followed Wilson’s use of psychedelic drugs.

Pohlad isn’t after sensationalism, but rather what used to be described as retrained good taste. So, in order to keep Wilson sympathetic, he ducks explicit portrayals or discussions of substance abuse.

Pohlad portrays Wilson as a deeply sensitive, easily manipulated pawn. In the 1960s Wilson’s lack of assertiveness leaves him under the thumb of his controlling father, Murry (Bill Camp).

Two decades later, Wilson is held in thrall by abusive therapist Eugene Landy (Paul Giamatti). Claiming his patient has paranoid schizophrenia, Landy keeps Wilson heavily medicated, and restricts the musician’s access to others who might help him.

As portrayed by John Cusack, this burned-out adult version of Wilson is eventually rescued thanks to the compassionate interventions of Melinda Ledbetter (Elizabeth Banks), a car saleswoman Wilson would eventually marry.

Uncomfortable details have undoubtedly been stripped away in the interests of a single, compelling narrative. And both Murry Wilson and Landy become stereotyped villains. Yet “Love & Mercy” can be appreciated for its celebration of one star’s at least partially successful maneuvering through the moral minefield laid down by wealth and fame.

The film contains a premarital bedroom scene, drug use and fleeting instances of profanity and coarse language. The Catholic News Service classification is A-III — adults. The Motion Picture Association of America rating is PG-13 — parents strongly cautioned. Some material may be inappropriate for children under 13.

PREVIOUS: Anglican theologian explores how we should speak about God

NEXT: Seriousness gets chewed up, spit out by ‘Jurassic World’