Seriousness gets chewed up, spit out by ‘Jurassic World’ 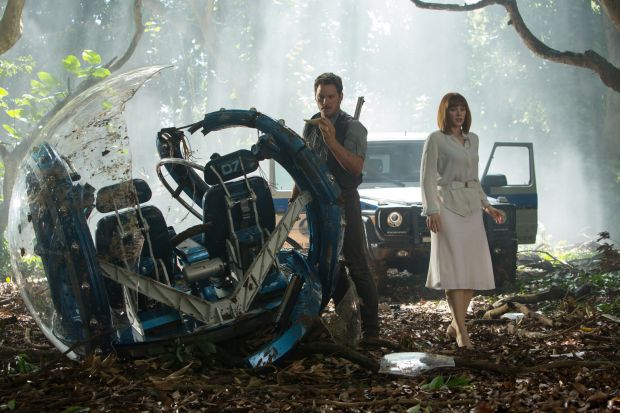 Chris Pratt and Bryce Dallas Howard star in a scene from the movie "Jurassic World." The Catholic News Service classification is A-III -- adults. The Motion Picture Association of America rating is PG-13 -- parents strongly cautioned. Some material may be inappropriate for children under 13.(CNS photo/Universal) See MOVIE REVIEW June 11, 2015.

NEW YORK (CNS) — Prepare to be stomped on by “Jurassic World” (Universal).

Like the $2 billion-grossing dinosaur-themed franchise of which it represents the latest installment, director Colin Trevorrow’s 3-D optional sci-fi adventure is big, gigantic, huge! And you, a mere homo sapiens, are puny. So know your place, and hand over your credit card.

If the thought springs to mind that, proportionally speaking at least, dinos did not necessarily possess nature’s largest brains, the reflection is not misplaced. Like the creatures that inhabit it, “Jurassic World” is all about brawn, sheer visual and commercial heft. Sharp-wittedness and emotional subtlety are not on offer, deep characterizations even less so.

Instead, this continuation of the series that began with 1993’s “Jurassic Park,” Steven Spielberg’s wildly popular adaptation of Michael Crichton’s 1990 novel, uses its human participants as anachronistically placed Darwinian bait, mere fodder for their outsized adversaries. So it hardly matters that they amount to nothing more than an ensemble of stick figures.

Take, for example, business-obsessed Claire (Bryce Dallas Howard). A driven career woman whose precise role in the management of the titular resort — where patently imprudent tourists come to gawk, for a price, at genetically re-created prehistoric predators — is never made clear, Claire is far too worried about getting ahead to have a family of her own.

Nor does she have time to spare for the duo of visiting nephews, 16-year-old Zach (Nick Robinson) and his preteen brother Gray (Ty Simpkins), who have been foisted on her by their soon-to-be-divorcing parents. So Claire, in her turn, hands off the boys to an assistant.

Such adult neglect, of course, gives Zach and Gray the perfect opportunity to wander off on their own. Extricating them from the inevitably resulting danger will require all the acumen of ex-military animal trainer Owen (Chris Pratt).

Who’s this Owen and what’s he doing here? As with Claire’s job description, information is sketchy.

He’s a consultant of some sort, it seems, and shares some unspecified offscreen history with Claire, the upshot of which is a romantic attraction thinly disguised as mutual dislike. Well, after all, a story like this needs its Indiana Jones stand-in, the lads need someone to look up to, and Claire needs a previously untamed he-man with whom to settle down — once the dinosaurs do.

There’s some perfunctory discussion, amid all the mayhem, about the proper limits of science: BD Wong reprises his role in the long-ago first picture by playing overly ambitious, if not quite mad, scientist Dr. Wu. And it can’t hurt to have a violence-loving warmonger added to the mix, so cue Vincent D’Onofrio as a straw-man militarist named Hoskins.

But, really, such feints in the direction of seriousness are beside the point. Anyone looking for interaction more meaningful than that which transpires between the DNA disaster of an uber-dino to whose rampage Trevorrow devotes most of his attention and the anonymous extras on whom the ill-designed creature contentedly munches have come to the wrong fictional island.

The elements listed below decidedly rule out the “Flintstones” crowd. But parents of insistent teens who find their patience in danger of extinction need not feel too guilty if resistance ultimately proves futile.

The film contains some gory interludes, a bit of comic innuendo, at least one use of profanity and a few crude and crass terms. The Catholic News Service classification is A-III — adults. The Motion Picture Association of America rating is PG-13 — parents strongly cautioned. Some material may be inappropriate for children under 13.