In ‘Dope,’ kids make a killing with deadly dealing 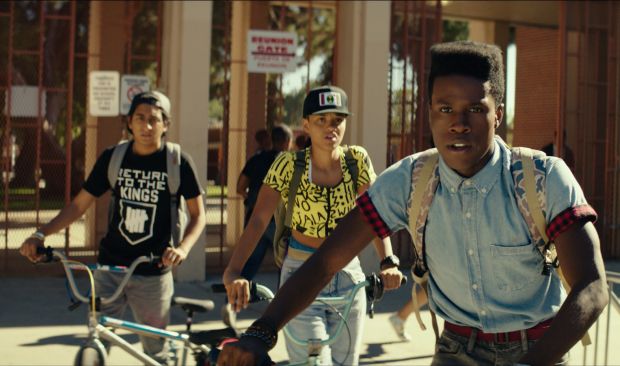 Moviegoers with capacious memories may recall that, when not sliding around the parquet floor of his affluent parents’ suburban home, dressed in little more than his BVDs and socks, Cruise’s character, Joel Goodson, turned this same opulent dwelling into a temporary bordello catering to the carnal desires of his peers.

What made Paul Brickman’s 1983 comedy especially pernicious was the fact that it justified Joel’s pimping as a valid response to his parents’ materialism — and that of the adult world in general. It also sent the message that crime pays, since Joel was able to parlay his exploitative exercise into an admissions nod from Princeton University.

Flash-forward to the present, and substitute drug dealing for flesh peddling — as well as Harvard Yard for Nassau Hall — and you’ll have a pretty good idea of what’s wrong with writer-director Rick Famuyiwa’s blend of comedy and drama “Dope” (Open Road). One other alteration is called for, though, since this time the scene is set not in the leafy outskirts of Chicago but on the mean streets of inner-city Los Angeles.

There we find academically gifted but somewhat nerdy high schooler Malcolm (Shameik Moore) struggling to dodge the lawlessness that surrounds him. Sharing his outsider’s interest in ’90s rap — as well as his ardent wish to steer clear of trouble — are Malcolm’s two best friends, Diggy (Kiersey Clemons) and Jib (Tony Revolori).

Before you know it, Malcolm is also embroiled with Dom, at least to the extent of accidentally acquiring a large stash of Dom’s product. With the dealer himself behind bars, plot developments leave Malcolm little choice but to market his unsought windfall, a small fortune’s worth of the party drug Molly.

Together with Diggy and Jib, Malcolm works out a scheme for selling the illicit pharmaceuticals online, a project to which he devotes increasing time and enthusiasm.

Perversely, “Dope” presents this dabbling with the dark side as an ingenious extracurricular activity, one that proves Malcolm’s resourcefulness and affords him a new level of self-awareness. Famuyiwa’s script thus misuses the array of social ills it endeavors to satirize as a justification for criminal behavior.

Boyish-looking Diggy self-identifies as a lesbian. This mostly incidental aspect of the movie becomes the means not only of implicitly normalizing wayward sexual acts, but of taking a brief sneering swipe at religion as well.

Diggy’s church, we’re informed, believes it’s possible to “pray the gay away.” Cue a prayer-circle scene in which, while all other heads are bowed in reverence, Diggy steals sly glances at a female co-parishioner.

This interlude, together with the bit of vulgar byplay that results from it, is restrained, however, when compared with the picture’s treatment of Malcolm’s habit of self-gratification — as well as a casual encounter in which he’s prospectively involved.