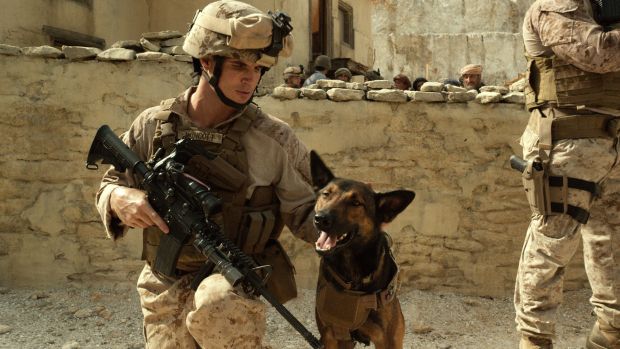 NEW YORK (CNS) — Following in the esteemed paw prints of Rin Tin Tin and Lassie comes “Max” (Warner Bros.), a heroic canine on a mission to vanquish evil while mending a broken family.

Sprung from the Malinois — or Belgian Shepherd — breed, Max is an official “military working dog” in Afghanistan, trained to locate bombs and weapons.

Under military rules, returning canines can be adopted by the family of their handler. And so Max is delivered to Kyle’s grieving parents, Pamela (Lauren Graham) and Ray (Thomas Haden Church), and his younger brother, Justin (Josh Wiggins).

Max is immediately drawn to Justin, much to the troubled teen’s annoyance. Justin is a rebel, failing to live up to his father’s high expectations. Disrespecting his parents and their God-centered values, he hangs out with an unsavory crowd. The last thing he wants to do is babysit his late sibling’s dog.

A silver lining arrives in the person of Carmen (Mia Xitlali), a sassy new girl in town who has a way with canines. “Dogs are pretty good judges of character,” she observes.

Carmen lends a hand, as well as her heart, and soon a major boy-dog bond develops — as too does a romance between the two youngsters.

All seems rosy until Tyler (Luke Kleintank), a wayward member of Kyle’s platoon, shows up. Tyler has been illegally sidelining as an arms dealer, a secret Kyle threatened to expose before his demise.

Needless to say, Max is not happy to see Tyler, and before long Justin uncovers a nefarious plot, as well as hidden facts pointing to the truth about his brother’s death.

Despite some mild action violence which may be too intense for the younger set, “Max” is a wholesome — and welcome — family drama. Director Boaz Yakin (“Remember the Titans”), who co-wrote the screenplay with former Marine Sheldon Lettich, nicely conveys Justin’s evolution from zero to hero, underscoring the importance of telling the truth and respecting your parents.

Yakin also wrangles some remarkably expressive performances from the half-dozen dogs who alternate in portraying the eponymous star.

The film contains scenes of combat and human peril as well as dog-fighting and a few mild oaths. The Catholic News Service classification is A-II — adults and adolescents. The Motion Picture Association of America rating is PG — parental guidance suggested. Some material may not be suitable for children.

PREVIOUS: In ‘Dope,’ kids make a killing with deadly dealing

NEXT: Book offers Catholic guide to raising a happy baby