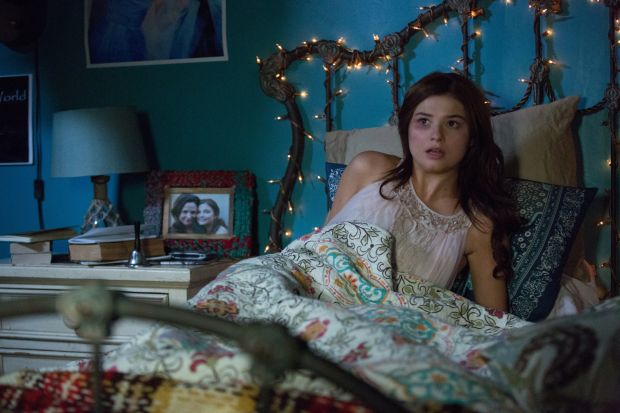 Stefanie Scott stars in a scene from the movie "Insidious: Chapter 3." (CNS photo/Focus)

NEW YORK (CNS) — Though elements of language and subject matter put “Insidious: Chapter 3” (Gramercy) beyond the appropriate reach of a youthful audience, mature moviegoers will find comparatively little to object to in this run-of-the-mill horror prequel.

Along with yet a third descent into this weak franchise’s patented postmortem realm, The Further, writer-director Leigh Whannell aims to provide viewers with the backstory of a character central to its previous installments: unassuming but spunky psychic Elise Rainier (Lin Shaye).

Before she got caught up in the occult woes of the Lambert family — the clan around whom the first two films revolved — Elise, it seems, had sworn off dabbling with the afterlife. Unspecified horrors had convinced the newly widowed medium to go into self-imposed retirement.

All that begins to change, however, with the arrival on Elise’s doorstep of high school senior and aspiring actress Quinn Brenner (Stefanie Scott). Dissatisfied with her do-it-yourself attempts to contact her recently deceased mother, grieving Quinn is anxious for the aid of a professional.

Elise reluctantly agrees to help, just this once. But it quickly becomes apparent that, in her amateurish effort to conjure up Mom’s benign presence, Quinn has instead summoned a malignant spirit to her side. This murderous wraith promptly involves the girl in a gruesome auto accident from which she emerges with two broken legs.

Since Quinn’s ineffectual dad, Sean (Dermot Mulroney), seems as ill-equipped to protect the now-immobilized maiden as her younger brother, Alex (Tate Berney), Elise has little choice but to do a supernatural Sinatra and head back into The Further.

As penned by Whannell, who also appears on screen in a relatively minor role, the workaday script takes an incidental but welcome stance against suicide. And Quinn’s metaphysical misadventure can be read as warning about the dangers of trying to communicate with the dead.

Yet the movie’s spiritual battle between good and evil is viewed exclusively from a paranormal perspective, with no reference to faith. That’s another good reason, if one were needed, to keep the impressionable at a safe distance.

The film contains potentially disturbing scenes of a car accident and its aftermath, occult themes, fleeting references to homosexuality, a couple of uses of profanity, at least one instance of the F-word and about a half-dozen crass terms. The Catholic News Service classification is A-III — adults. The Motion Picture Association of America rating is PG-13 — parents strongly cautioned. Some material may be inappropriate for children under 13.

PREVIOUS: The ‘Spy’ who satirized me: Vulgarity trumps film’s fun

NEXT: Anglican theologian explores how we should speak about God