The ‘Spy’ who satirized me: Vulgarity trumps film’s fun 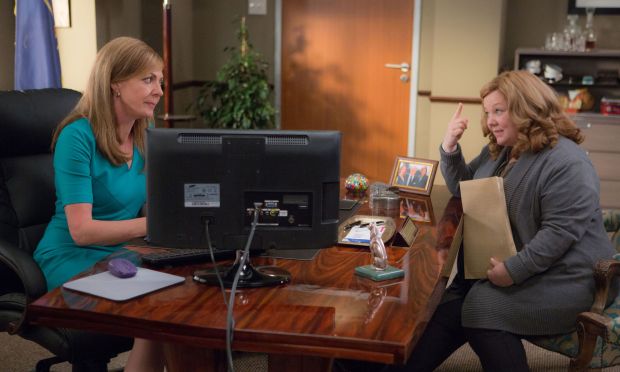 Allison Janney and Melissa McCarthy star in a scene from the movie "Spy." (CNS photo/Fox)

Yet the abundant entertainment that might be hoped for from his genre-ribbing comedy, with its array of eccentric characters, is ultimately squelched by an excess of crude material and vulgar dialogue.

Equally overburdened by the film’s needless cargo of coarseness is the mild poignancy of its central relationship. Blinkered by vanity, the elegant, James Bond-like CIA field operative Bradley Fine (Jude Law) fails to realize that he owes the better part of his success to the remote, high-tech support he receives from his desk-bound partner back at headquarters, Susan Cooper (Melissa McCarthy).

Bradley’s shallow assumptions also blind him to the fact that awkward, self-effacing Susan’s devotion to him is more than merely professional.

Susan’s heartfelt dedication is put to the test when Fine becomes a casualty in the agency’s effort to bring down Rayna Boyanov (Rose Byrne), the ruthless heir of an international crime dynasty. Determined to avenge her beloved idol, Susan convinces her prickly boss, Elaine Crocker (Allison Janney), to let her leave Langley and go undercover. Though ostensibly her mission is merely to track Rayna, Susan’s real goal is to nab the evildoer.

Masked by the series of uniformly embarrassing disguises Elaine supplies her with, Susan pursues outrageously spoiled, wildly cynical Rayna from one elegant European venue to the next.

Along the way, she’s aided, albeit ineptly, by her goodhearted officemate and best friend Nancy (Miranda Hart). But the relentless, disdain-driven interference of another colleague, macho lunkhead Rick Ford (Jason Statham), threatens to derail Susan’s risky project at every turn.

Vastly superior to Feig and McCarthy’s popular 2011 collaboration, “Bridesmaids,” “Spy” deploys the latter’s trademark blend of orneriness and sensitivity to far more satisfying effect. Yet, along with a level of bloodletting wholly unjustified by the comic context, the childish urge to shock undermines the script’s more respectable humor, tainting the whole endeavor with a stain of sophomoric stupidity.

The film contains intermittent harsh violence with gore, brief obscene images, much sexual and some scatological humor, over a dozen uses of profanity and pervasive rough and crude language. The Catholic News Service classification is O — morally offensive. The Motion Picture Association of America rating is R — restricted. Under 17 requires accompanying parent or adult guardian.

NEXT: More yawns than screams from ‘Insidious’ prequel