Moral clarity falls behind in ‘A Walk in the Woods’ 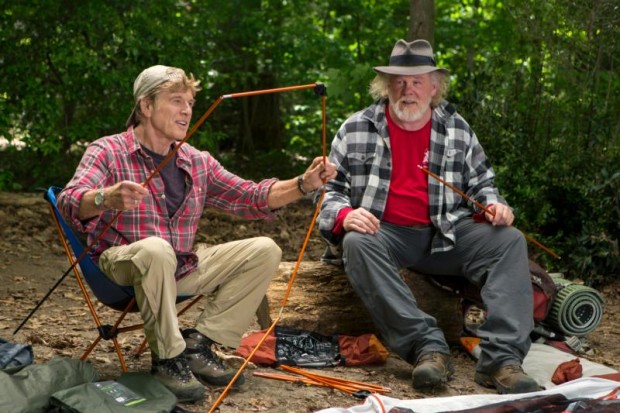 Robert Redford and Nick Nolte star in a scene from the movie "A Walk in the Woods." (CNS photo/Broad Green Pictures)

NEW YORK (CNS) — Buddies hit the trail — rather than the road — in the scenic fact-based comedy “A Walk in the Woods” (Broad Green). But the footsteps of director Ken Kwapis’ adaptation of Bill Bryson’s 1998 memoir tread both sides of the moral divide simultaneously, making his expedition suitable only for discerning adults.

Despite its real-life origins, the film manages to combine a number of standard Hollywood elements more often found in Tinseltown’s fictional fare. For starters, we have a pair of mildly cantankerous older men — travel author Bill Bryson (Robert Redford), who takes Andy Rooney-like exception to contemporary prices, and loveable rogue Stephen Katz (Nick Nolte), the aging embodiment of an Allman Brothers Band song from about 1972.

These estranged friends are thrown back together — and thus enabled to qualify as an odd couple — when Bill, chafing at semiretirement and seeking a remedy for his long-standing writer’s block, decides to defy his physical limitations by hiking the 2,200-mile-long Appalachian Trail. The old “grandpa’s not ready for the home just yet” theme? Check.

Not surprisingly, Bill’s eminently sensible British-born wife Catherine (Emma Thompson) objects vigorously to his quixotic plan. Though he remains resolute, Bill does at least yield to Catherine’s insistence that he include a companion on the trip.

But the only volunteer Bill can find to accompany him turns out to be Stephen, a figure from his distant past with whom Bill — partly, at least, by choice — has long been out of touch.

As domesticated Bill and his rolling stone of a sidekick lumber through the forest — a veteran of multiple orthopedic surgeries, Stephen is in even worse shape than Bill — they pass the time comparing notes on life. Some of these, most prominently, perhaps, Stephen’s struggle with alcoholism, are honorable enough.

Yet a surfeit the pals’ dialogue deals with sexuality — including the humorously remembered bedroom escapades of their shared youth. And the frivolous tone of Rick Kerb and Bill Holderman’s script invites viewers to regard physical intimacy, at least among singles, as little more than a form of entertainment.

Marital fidelity gets a somewhat more sober treatment. But even events turning on this topic are dealt with ambiguously.

While one sequence celebrates faithfulness in the face of temptation, another winks at a potentially adulterous dalliance. The moral significance of this potential encounter — the screenplay leaves us uncertain just how far things actually progressed — is sloughed off on the dubious grounds that the randy behavior of fat people is too ridiculous to be taken seriously.

All this detracts from what is, in other respects, a generally pleasant, though excessively talky, excursion through a series of landscapes that vary from the soothing to the magnificent.

The film contains defective values, including an ambivalent attitude toward adultery, a nongraphic scene of aberrant sexual activity, a glimpse of partial rear nudity, much off-color humor, numerous uses of profanity and frequent rough and crude language. The Catholic News Service classification is L — limited adult audience, films whose problematic content many adults would find troubling. The Motion Picture Association of America rating is R — restricted. Under 17 requires accompanying parent or adult guardian.