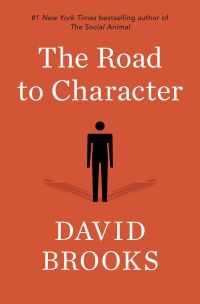 What do Dwight Eisenhower, Dorothy Day, St. Augustine of Hippo and Frances Perkins have in common? Much more than you might think. All of them — the 34th president, the leader of the Catholic Worker movement, the early saint and the labor leader — developed strong moral character and inner depth through lifelong, self-reflective struggle to overcome their shortcomings. David Brooks devotes a chapter to each in this collection of profiles of inspiring thinkers and leaders.

“The Road to Character” is a fascinating exploration of what Brooks calls the “eulogy virtues” such as compassion, courage, integrity, and faithfulness — as contrasted with typical Western “resume virtues” such as ambition, wealth, status and fame. He undertook the project, he explains, to challenge himself (as well as readers): “I have lived a life of vague moral aspiration — regularly wanting to be good, vaguely wanting to serve some larger purpose, while lacking a concrete moral vocabulary, a clear understanding of how to live a rich inner life, or even a clear knowledge of how character is developed and depth is achieved.”

Well researched and written, the book does an excellent job of placing Western moral ecology in historical context. Brooks notes that the mid-20th century, although “a more racist, sexist and anti-Semitic culture,” was a time when popular culture, at least, seemed more restrained. People did not trumpet themselves through “message T-shirts … vanity license plates … bumper stickers with personal or moral declarations.” The norm was not to blow your own horn or get “too big for your britches.” Typical of this era, Brooks relates, the elder George Bush was reluctant to speak about himself on the campaign trail, to the everlasting chagrin of his speechwriters. According to the values Bush learned during his childhood, using the “I” was simply too immodest.

In our time, Brooks writes, we have left behind this culture of humility (the “Little Me”) for the self-aggrandizing culture of the “Big Me.” This is the culture of the selfie, he says, emphasizing that “you are special,” that you should “Trust yourself” and “Be true to yourself.” Among the evidence Brooks cites for this is long-term Gallup Poll data. For instance, in 1950 just 12 percent of high school seniors said they considered themselves to be “a very important person,” compared to 80 percent in 2005.

Not surprisingly, this current “gospel of self-trust” dovetails with an increasing desire for fame. In 1976, people polled on their life goals ranked fame 15th out of 16. But in 2007, Brooks reports, 51 percent of young people identified fame as one of their major goals.

Even Girl Scout handbooks over the years have evolved from preaching “an ethic of self-sacrifice and self-effacement” to today’s outright advocacy of paying far more attention to oneself and one’s own thoughts and feelings. Brooks gives a striking example of the Big Me culture in this quote from the megachurch leader Joel Osteen’s book “Become a Better You”: “ ‘God didn’t create you to be average … start (believing]) ‘I’ve been chosen, set apart, destined to live in victory.’” For its thoughtful skewering of Big Me narcissism alone, the book ought to be read by every schoolteacher.

Brooks’ profiles of diverse thinkers and leaders who worked hard to overcome their own weaknesses to achieve strong character and inner depth are an instructive antidote to today’s pervasive focus on the self. In one of the most interesting chapters, he shows how Eisenhower learned to suppress his youthful impetuosity and even rage to achieve admirable self-restraint and balance. This served him and the nation well in the tense period of the Cold War.

Day, the devout Catholic convert and staunch advocate for the poor, was acutely self-critical throughout her life. Through suffering, she learned to embrace a life of simplicity and faithfulness to care for others. This gave her an anchor that she did not have during her early years, and imbued her with gratitude at her life’s end (as witness the inscription she chose for her tombstone: “Deo Gratias, Thanks be to God”).

St. Augustine is included as an example of someone who started out asserting his need to control life, only to be chastened by it into “a posture of openness and surrender” to God and to grace. Ultimately, this surrender led him to a much deeper inner life and spiritual satisfaction.

Among the others profiled are the British writers George Eliot (Mary Anne Evans) and Samuel Johnson and Montaigne, the French essayist. Brooks shows convincingly how the introspective Eliot grew from youthful “self-centeredness” into a courageous “generous sympathy,” even though she could not conquer her fits of depression and insecurity about her own writing. Her deep love for her husband George Lewes sustained and deepened her character.

At the end, Brooks summarizes several principles gleaned from this absorbing study of model individuals. A key one is his rejection of an ethics based simply on “how I feel” about something. “Be true to yourself,” the bromide often dispensed by graduation speakers, does not help one develop a strong ethical system.

Brooks thinks that humans are “splendid creatures” who are also flawed. That is OK, he adds, because sin and limitations are a basic part of human nature. But Brooks believes passionately that “If you struggle successfully with your moral weaknesses … (humility is very important here) — you will achieve tranquility and gratitude.”

“The Road to Character” draws from several fields — history, psychology, spirituality, politics — and should be savored, chapter by chapter, perhaps even as a meditation. The reader is left with a keen grasp of one of Brooks’ truisms: “Joy is a byproduct experienced by people who are aiming for something else. But it comes.”

Roberts directs the journalism program at the State University of New York at Albany and is the author of two books about Dorothy Day and the Catholic Worker movement.

PREVIOUS: Moral clarity falls behind in ‘A Walk in the Woods’

NEXT: Movie review: The Transporter Refueled