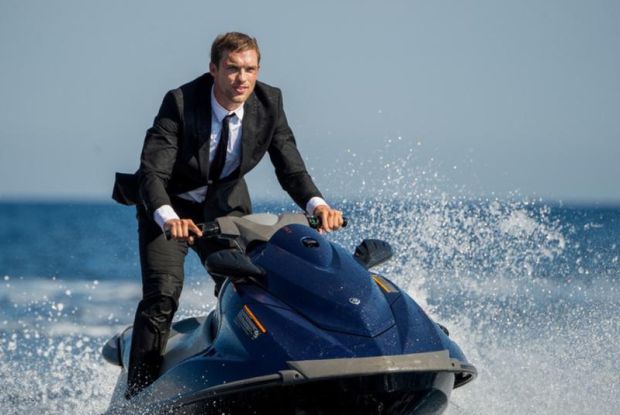 Ed Skrein stars in a scene from the movie "The Transporter Refueled." (CNS photo/Europa)

NEW YORK (CNS) — Like some of the residents of the French Riviera on which it’s set, “The Transporter Refueled” (EuropaCorp) — director Camille Delamarre’s addition to a franchise of excessively violent action flicks — aspires to elegance but comes across instead as tawdry and overbaked. That’s hardly surprising given this sometimes absurd film’s uniformly poor moral and aesthetic pedigree.

The latest outing’s trio of predecessors first hit the pavement — and the skids — in 2002. Then as now, the formula was a straightforward one: Take a taciturn, ethically neutral macho man, endow him with mad martial arts skills and unparalleled prowess behind the wheel, then test his resolve to steer clear of his clients’ problems (he serves as a chauffeur of last resort for the shady) by getting him mixed up with — you guessed it — a dame.

Back when the millennium was young, this he-man role was filled by Jason Statham. Nowadays it’s Ed Skrein who rumbles at us in a low register under the name Frank Martin.

Though indifferent toward his passengers, Frank has a soft spot for his dad, Frank Sr. (Ray Stevenson), a retired British intelligence operative. So, when Anna (Loan Chabanol), the leader of a quartet of prostitutes desperate to break free of their servitude, complicates what was meant to be a no-strings-attached deal by having her co-conspirators kidnap Pops, Frank is forced to suspend his apathy yet again.

What does it say about MI5 — or is it 6? — that one of their pensioners can be so easily spirited away by mere amateurs? Producer and screenwriter Luc Besson’s script never pauses to answer.

Anna and her friends are not only plotting to liberate themselves, but to wreak revenge on Yuri (Yuri Kolokolnikov), the Russian mobster who long ago ensnared, and continues to control, them. (Anyone looking for a serious engagement with the real-world problem of human trafficking has, needless to say, wandered into the wrong cinematic space.)

As Frank jumps into the ladies’ scheme with both feet — and fists — Delamarre keeps most of the endless violence that ensues gore-free. But the car chases that represent his kitschy movie’s other stock-in-trade all but wipe out the mobile gendarmes. Unsurprisingly, they are no match for the rule of the road-flouting Frank — who also blithely endangers the public at large with his auto antics.

The canons of human behavior get jettisoned just as quickly as the traffic laws. Thus, Frank’s filial piety doesn’t prevent him from bedding down, when given the opportunity, with the mastermind of his father’s captivity. In the same forgiving spirit, Frank Sr. has a roll in the hay with not one but two of his fetching waylayers.

Though they’re mostly kept off screen, these escapades are treated, both before and after, as enviable perks of the James Bond lifestyle. And that’s not to mention the little twitter of amusement with which we’re clearly meant to respond to Pa’s horizontal square dance.

Oh, that Frank Sr.! Still racy after all these years!

The film contains pervasive harsh but largely bloodless violence, reckless disregard for life, a revenge theme, strong sexual content — including a benign view of group sex, a semi-graphic nonmarital encounter, some partial nudity and same-sex kissing — at least one use of profanity and occasional crude language. The Catholic News Service classification is O — morally offensive. The Motion Picture Association of America rating is PG-13 — parents strongly cautioned. Some material may be inappropriate for children under 13.

NEXT: Stephen Colbert, in interview, discusses faith, joy and humor