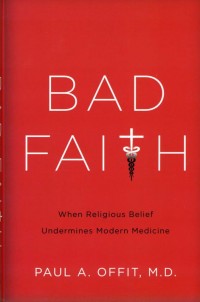 Dr. Paul Offit, chief of the Division of Infectious Diseases and director of the Vaccine Education Center at the Children’s Hospital of Philadelphia, has written a deeply felt and deeply flawed book about a particularly egregious form of child abuse, “medical neglect in the name of God.”

Why do some parents choose prayer over medicine? Why do children die of preventable and treatable diseases? Why do laws allow religious exemptions to vaccination? Why do “we allow people to claim that they are acting in the name of God when they are doing no such thing.”

Offit is at his best when telling the story of Doug and Rita Swan, Christian Scientists whose son died of bacterial meningitis. Five years after his death they founded Children’s Healthcare Is a Legal Duty, or CHILD, an advocacy group to “shine a light on those who … had medically neglected their children in the name of God.”

The “silent epidemic” is exacerbated by laws providing for religious exemptions from child abuse and neglect laws. This epidemic became very visible in the 1991 Philadelphia measles epidemic, which resulted in the deaths of nine children. This daunting public health emergency was caused by the Faith Tabernacle Congregation and the First Century Gospel Church, cultlike groups that refused vaccination as part of their belief that “the Bible is opposed to all means of healing apart from God’s way.”

The conflation of so many issues weakens his purported desire to understand, and explain, why people choose religion over medicine. Offit’s simplistic answer is that “for many deeply religious people, obedience to God means a trip to heaven, where one can live for all eternity basking in the power and the glory of the Almighty.” Offit concludes that much of this is the result of deeply held beliefs that a vengeful God will mete out extreme punishments for disobedience. He supports this claim by a digression into Stanley Milgram’s Yale experiments on the psychology of obedience in the early 1960. He does not allude to the ethical criticisms that dogged that study.

Offit offers a thin exegesis of biblical texts, with an unfortunate anti-Jewish slant. Like the faith healers he rightly excoriates, he looks for proof texts to support his arguments.

Judaism, he claims, “believed that people got sick because they’d done something wrong.” Jesus’ “views of illness and healing were not those of his faith” but were influenced by the story of Job, which “contradicts much of what the Old Testament teaches about why people get sick.” While religious healing “isn’t part of the Jewish tradition, it was at the very heart of Jesus’ ministry. … According to Jesus, illness was the result of bad luck, not bad acts.”

In discussing Catholic opposition to abortion, he suggests that the visitation of Mary to her cousin Elizabeth, pregnant with John the Baptist, is “the most cited passage” to support the position “that a human is a human from the moment of conception.” He does not provide supporting evidence for that claim but, instead, offers a snide and sloppy rendering of the story.

“Virgin birth aside, when John the Baptist leapt for joy after sensing Jesus in Mary’s womb, he was doing something that modern medicine still can’t do: detect a pregnancy a few days after conception. … Yet John the Baptist, a 6-month-old fetus lacking the kinds of neurotransmitters and synapses that would have enabled one brain cell to communicate with another — allowing for emotions such as joy — leaped for joy for the unborn Jesus. The fact that modern medicine can’t explain this biblical story is, however, irrelevant. All religions require belief in a world beyond the observable laws of nature.”

Offit labels the rhetoric around abortion as “the dialogue of the deaf” and, unfortunately, that description equally characterizes “Bad Faith.” This could have been a thoughtful and coherent study but is, instead, a disappointing and mean-spirited book.

PREVIOUS: When going gets tough, ‘The Martian’ becomes fully human