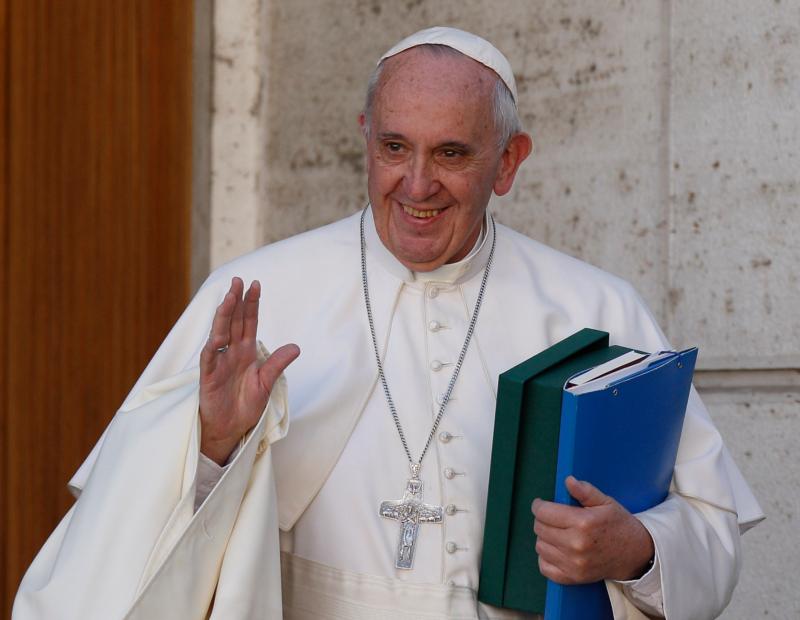 Pope Francis waves as he leaves a session of the Synod of Bishops on the family at the Vatican Oct. 24. (CNS photo/Paul Haring)

VATICAN CITY (CNS) — While not specifically mentioning the controversial proposal of a path toward full reconciliation and Communion for the divorced and civilly remarried, members of the Synod of Bishops on the family handed Pope Francis a report emphasizing an obligation to recognize that not all Catholics in such a situation bear the same amount of blame.

The 94-paragraph report approved Oct. 24, the last working day of the three-week synod, highlighted the role of pastors in helping couples understand church teaching, grow in faith and take responsibility for sharing the Gospel. It also emphasized how “pastoral accompaniment” involves discerning, on a case-by-case basis, the moral culpability of people not fully living up to the Catholic ideal.

Bishops and other full members of the synod voted separately on each paragraph and the Vatican published those votes. The paragraph dealing specifically with leading divorced and remarried Catholics on a path of discernment passed with only one vote beyond the necessary two-thirds.

Austrian Cardinal Christoph Schonborn of Vienna told reporters Oct. 24 that the key word in the document’s discussion of ministry to divorced and civilly remarried people is “‘discernment.’ I invite you all to remember there is no black or white, no simple yes or no.” The situation of each couple “must be discerned,” which is what was called for by St. John Paul II in his 1981 exhortation on the family, he said.

The cardinal told Vatican Insider, a news site, that although St. John Paul called for discernment in those cases, “he didn’t mention all that comes after discernment.” The synod’s final report, he said, proposes priests help divorced and remarried couples undergoing conversion and repentance so that they recognize whether or not they are worthy to receive the Eucharist. Such an examination of conscience, he said, is required of every Catholic each time they prepare to approach the altar.

As Pope Francis said at the beginning of the synod, church doctrine on the meaning of marriage as a lifelong bond between one man and one woman open to having children was not up for debate. The final report strongly affirmed that teaching as God’s plan for humanity, as a blessing for the church and a benefit to society.

While insisting on God’s love for homosexual persons and the obligation to respect their dignity, the report also insisted same-sex unions could not be recognized as marriages and denounced as “totally unacceptable” governments or international organizations making recognition of “‘marriage’ between persons of the same sex” a condition for financial assistance.

The report also spoke specifically of: the changing role of women in families, the church and society; single people and their contributions to the family and the church; the heroic witness of parents who love and care for children with disabilities; the family as a sanctuary protecting the sacredness of human life from conception to natural death; and the particular strain on family life caused by poverty and by migration.

The Catholic Church recognizes a “natural” value in marriage corresponding to the good of the husband and wife, their unity, fidelity and desire for children. But the sacrament of marriage adds another dimension, the report said. “The irrevocable fidelity of God to his covenant is the foundation of the indissolubility of marriage. The complete and profound love of the spouses is not based only on their human capabilities: God sustains this covenant with the strength of his Spirit.”

But human beings are subject to sin and failure, which is why synod members recommend the need for “accompaniment” by family members, pastors and other couples. “Being close to the family as a traveling companion means, for the church, assuming wisely differentiated attitudes: sometimes it is necessary to stay by their side and listen in silence; other times it must indicate the path to follow; and at still other times, it is opportune to follow, support and encourage.”

A draft of the report was presented to synod members Oct. 22, and 51 bishops spoke the next morning about changes they would like to see in the final draft. Jesuit Father Federico Lombardi, Vatican spokesman, told reporters that several bishops mentioned specifically a need to improve the text’s references to “the relationship between conscience and the moral law.”

The text refers to conscience in sections dealing with procreation and with marital situations the church considers irregular, particularly the situation of divorced and civilly remarried Catholics.

First, though, synod members promised greater efforts to be with couples in crisis and praised divorced Catholics who, “even in difficult situations, do not undertake a new union, remaining faithful to the sacramental bond.” Such Catholics, they noted, can and should “find in the Eucharist the nourishment that sustains them.”

Those who have remarried without an annulment of their sacramental marriage must be welcomed and included in the parish community in every way possible, the report said. “They are baptized, they are brothers and sisters, the Holy Spirit gives them gifts and charisms for the good of all.”

Quoting from St. John Paul’s exhortation on the family, the report insists that pastors, “for the sake of truth,” are called to careful discernment when assisting and counseling people who divorced and remarried. They must distinguish, for instance, between those who “have been unjustly abandoned, and those who through their own grave fault have destroyed a canonically valid marriage,” in the words of St. John Paul.

Priests must “accompany interested people on the path of discernment in accordance with the teaching of the church and the guidance of the bishop,” the report said.

While the report makes no explicit mention of absolution and the return to Communion, it seems to leave some possibility for such a solution by quoting the Catechism of the Catholic Church’s affirmation that “imputability and responsibility for an action can be diminished or even nullified” because of different conditions. Just as the degree of guilt will differ, the report said, “also the consequences of the acts are not necessarily the same in all cases.”

“Responsible parenthood presupposes the formation of the conscience, which is ‘the most secret core and sanctuary of a man. There he is alone with God, whose voice echoes in his depths,'” said the report, quoting from the Second Vatican Council’s Pastoral Constitution on the Church in the Modern World. “The more spouses try to listen to God and his commandments in their consciences, the freer their decision will be” from external pressures, the report said.

NEXT: Synod members disagree on report’s opening to Communion for remarried