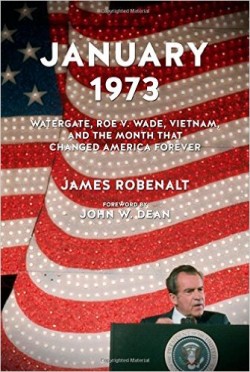 January of 1973 was a month, as Lady Bracknell says in “The Importance of Being Earnest,” “crowded with incident.”

The war in Vietnam was dragging on and the negotiations that had been going on almost as long between Henry Kissinger and the North Vietnamese hadn’t produced any peace accord. Richard Nixon, having ordered the intense bombing of Cambodia and North Vietnam at Christmas time in 1972 to jump-start the negotiations, wanted a peace accord to coincide with his second inauguration.

Meanwhile, the trial of the Watergate “burglars” began and ended in that month with the country still unaware of the involvement of the White House in the break-in of the Democratic national headquarters. The inauguration went ahead on Jan. 20 with no peace accord. But the next day, South Vietnamese President Nguyen Van Thieu sent a letter agreeing with the terms of the treaty Kissinger and the North Vietnamese had struck, so Nixon’s great victory came 24 hours too late. Sadly, the peace accord more resembled a cease-fire that only held until mid-February.

On Jan. 22, ex-President Lyndon Johnson died on a plane flying from his ranch to a hospital in San Antonio. The same day, the Supreme Court handed down its decision in Roe v. Wade case. The news of Johnson’s death briefly overshadowed the shock waves created by the abortion decision.

James Robenalt, the author of “January 1973,” believes this extraordinary confluence of events would alter the American political system and that we are still living with the changes that month brought us. A government that had worked by each party giving a little to the other to achieve a greater end transformed into a political system based on confrontation. Politics became a war in which neither side surrendered anything to its enemies.

The result has left us with the Congress in gridlock with no end in sight. Roe v. Wade created a new religious and conservative wing of the Republican Party which forced centralists to the right and has split the party, which has had the perverse result of weakening it.

Sadly, “January 1973” reminds us of the venality of President Nixon. Having won a long-sought peace accord with the Vietnamese, Nixon’s first response was not one of joy and celebration. Instead he called together his staff to plan an all-out war to destroy or discredit his enemies: liberals, anti-war activists and the press. Nixon so hated the then-dean of the National Cathedral, the Rev. Francis B. Sayre, for his anti-war stance that he refused to attend the funeral of Harry S. Truman and almost didn’t attend Johnson’s memorial service until it was moved from the National Cathedral.

For Catholic readers, the chapters on the progress through the Supreme Court of the decision that ended with Roe v. Wade may be the most disturbing, but Robenalt gives us a lucid and unbiased account of how the decision was developed. It serves to remind us of what the decision really says and not what people have made it say to further their agendas.

“January 1973” is a fascinating and readable review of an important month in American history. One might argue other months like August of 1968 or even April of 1865 changed history more profoundly, but it is hard to deny that January of 1973 hardened the rifts in American politics that have led us to the stalemate we live with today.

Yearley earned both a master’s degree and a certificate of advanced study in theology from the Ecumenical Institute at St. Mary’s Seminary and University in Baltimore.

PREVIOUS: We can tell you what ‘The Peanuts Movie’ is all about, Charlie Brown

NEXT: Globe-spanning James Bond brings a conscience to ‘Spectre’