Movie review: My All American 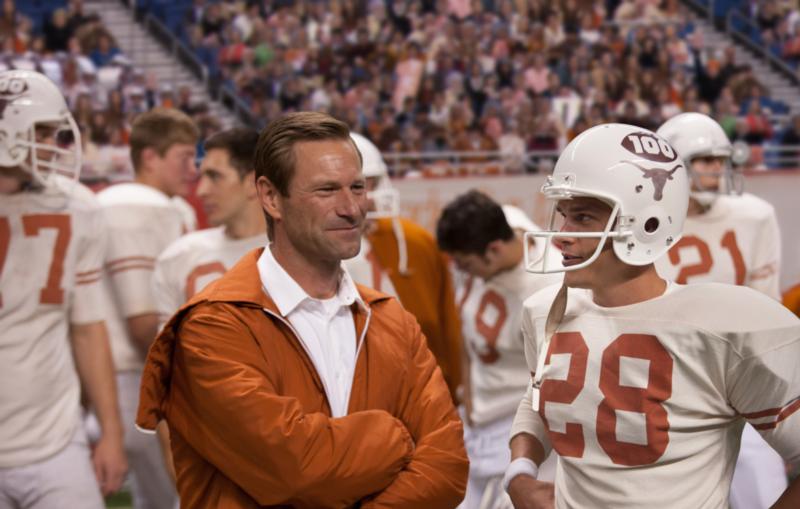 Aaron Eckhart and Finn Wittrock star in a scene from the movie "My All American." (CNS photo/Clarius Entertainment)

NEW YORK (CNS) — No one in “My All American” (Clarius) actually says, “Go out and win one for the Gipper.” Neither will audiences hear the words pluck or moxie used.

Though the film avoids such outright boosterism, the term “legend” is thrown around quite a bit. And, in all honesty, not without reason.

This biopic is another chapter in the ongoing secular hagiography of Freddie Steinmark. At 5-foot-9 and 154 pounds, Steinmark was an undersized — and therefore unlikely — football star. Yet he managed to gain lasting fame as the starting safety for the undefeated 1969 University of Texas Longhorns.

That year’s consensus national champions, based on wire-service polls of sportswriters and coaches, the Longhorns memorably defeated Notre Dame in the Cotton Bowl on New Year’s Day 1970. But Steinmark was not on the field.

His final game was the Longhorns’ last regular-season match. Dubbed “The Game of the Century,” that contest ended with a 15-14 victory over the Longhorns’ archrivals from the University of Arkansas.

Soon afterward, Steinmark’s left leg was amputated at the hip in an effort to stem the spread of an aggressive bone cancer. His sideline appearance on crutches to cheer his teammates on at the Cotton Bowl ranks, not surprisingly, as a celebrated moment in the annals of college sports.

Steinmark died in 1971 after penning a memoir. He’s memorialized on the scoreboard at the university’s football stadium. And his short life has so far generated two biographies, including Jim Dent’s “Courage Beyond the Game: The Freddie Steinmark Story,” on which the film is based.

Burnishing his allure for sports fans of faith, Steinmark was a devout Catholic known for praying the rosary daily — twice on game days. He was close to Father Fred Bomar, and spent his last months in the rectory of the priest’s parish, St. Peter the Apostle in Austin (Father Bomar died in 2010).

That part of his life isn’t here, however. Instead, the movie focuses on the bond between Freddie (Finn Wittrock) and Longhorns coach Darrell Royal (Aaron Eckhart).

A high school star from Colorado, Freddie epitomized the stoicism athletes of his era were meant to embody. Their code required them to “shake off” even serious injuries while giving 110 percent for gruff-yet-lovable coaches and the good of the team — no matter what.

Thus Freddie played his final game in considerable pain, and was found afterward to have the fatal tumor that had been growing on his thigh throughout his last season.

Courage in the face of poignant challenges can make for fine entertainment. Indeed, the fact-based sports tragedy constitutes a storied mass-media tradition, one that reaches back to the 1971 ABC movie of the week “Brian’s Song” (briefly released the same year as a feature film), 1973’s “Bang the Drum Slowly” and, ultimately, to the great-granddaddy of the genre, “Knute Rockne, All American,” from 1940.

By contrast to the narrative surge that carried those films into the end zone, though, with “My All American,” Pizzo bogs down in maudlin sentiment. As a result, Freddie comes off as a bland and enigmatic figure.

If nothing else, Freddie understands his destiny from the start. As instilled in him by his ex-athlete father, “Big Fred” (Michael Reilly Burke), and devoted mother, Gloria (Robin Tunney), his fate clearly awaits on the gridiron.

High school flirtation with girlfriend Linda Wheeler (Sarah Bolger) moves swiftly into a chaste and supportive college relationship. “You don’t need to like football to like Freddie,” one of her friends advises Linda. “You just need a pulse.”

Steinmark dreams of playing at Notre Dame or the University of Colorado, but eventually gets a scholarship offer from Royal, which then makes him long to defeat the Fighting Irish.

Christian faith is downplayed in favor of characters who speak of fulfilling their lives. Though Freddie is shown in prayer at moments of crisis — after his roommate’s brother is killed in Vietnam and after his own diagnosis — the depth of his apparently signal religious commitment is not plumbed.

The film contains a single instance each of crude and crass language. The Catholic News Service classification is A-II — adults and adolescents. The Motion Picture Association of America rating is PG — parental guidance suggested. Some material may not be suitable for children.

NEXT: Probing questions will help readers to ‘rediscover Jesus’