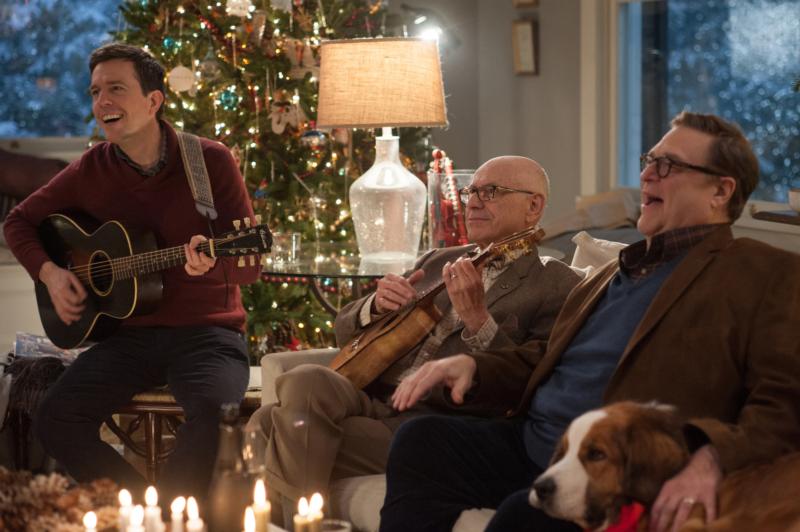 Ed Helms, Alan Arkin and John Goodman star in a scene from the movie "Love the Coopers." (CNS photo/CBS Films and Lionsgate)

A Norman Rockwell painting this is not. The cast of characters is uniformly disagreeable and ill-mannered, from octogenarian Aunt Fishy (June Squibb), whose dementia has lewd overtones, to 5-year-old Madison (Blake Baumgartner) who habitually repeats an obscene phrase — to the evident glee of many on screen.

But hey, ’tis the season! And in Hollywood that means conspicuous consumerism and borderline gluttony, with nary a mention of the Savior’s birth.

Director Jessie Nelson (“I Am Sam”) and screenwriter Steven Rogers do throw one “angel” into the mix: Joe (Jake Lacy), a soldier on holiday leave. He’s the token Christian, but he might as well have a target on his back, as he becomes the butt of many lame gags.

The film is narrated, fittingly, by the Coopers’ dog (voice of Steve Martin). He watches the day unfold as his owner, Charlotte (Diane Keaton), awaits the arrival of her extended clan.

“I want everyone to have the memory of a perfect Christmas,” she tells her husband of 40 years, Sam (John Goodman).

Fat chance. Behind the scenes, Charlotte and Sam are about to divorce. Their son, Hank (Ed Helms), dad to potty-mouthed Madison, has already split with his spouse, and is struggling — obviously — with single parenthood.

Charlotte and Sam’s single daughter, Eleanor (Olivia Wilde), is off the rails, having an affair with a married man. Flying home for Christmas, she meets Joe in an airport bar. In between ridiculing his faith and values, Eleanor begs this complete stranger to pose as her boyfriend, and join her at home.

“Calm down, man up and lie to my parents,” she insists.

Adding to the mayhem are Charlotte’s ditzy sister, Emma (Marisa Tomei), a kleptomaniac under arrest, and kindly, but waywardly romantic, grandpa Bucky (Alan Arkin). Bucky is smitten — to supposedly comic effect — with the much younger Ruby (Amanda Seyfried), a depressed waitress at his favorite diner.

A slender message about the enduring bonds of family as well as the value of tolerance and forgiveness snaps easily under the weight of tasteless and occasionally blasphemous jokes.

Joe is the only ray of light — and his influence can be felt in the generally moral wrap-up, a conclusion that just barely pulls this project back from complete offensiveness. Yet it’s characteristic of the screenplay that, when Joe dutifully reminds his newfound family to say grace before the big holiday meal, and begins to lead them in prayer, he’s interrupted by an outbreak of canine flatulence.

The film contains pervasive indecent and some sacrilegious humor, an anti-Christian tone, fleeting approval of homosexuality, implied premarital sex, adult banter and occasional profane and crude language. The Catholic News Service classification is L — limited adult audience, films whose problematic content many adults would find troubling. The Motion Picture Association of America rating is PG-13 — parents strongly cautioned. Some material may be inappropriate for children under 13.

NEXT: Movie review: My All American