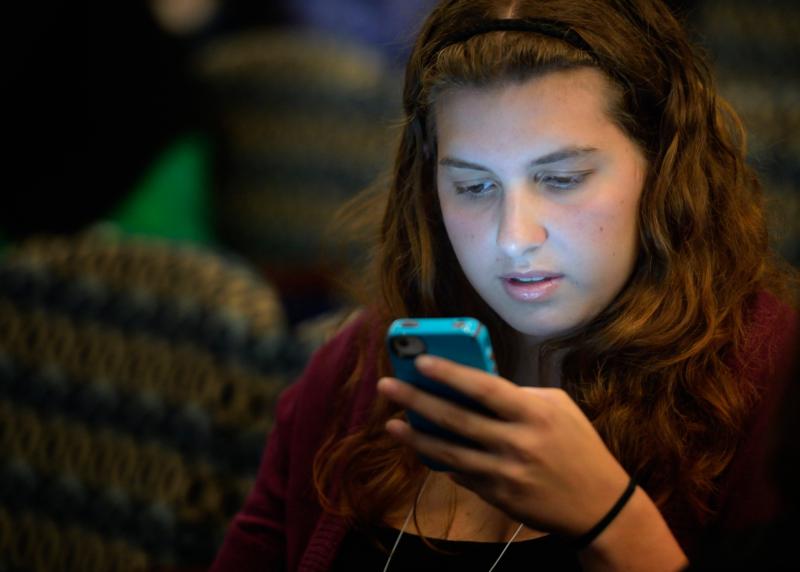 A young woman tweets a message during a 2012 conference in Washington. A new study on media usage by children ages 8-18 shows that teenagers ages 13-18 use media an average of nearly nine hours a day. (CNS photo/Paul Jeffrey)

The numbers are only averages. Some children use media less, while others use media more. Teens described as “light users” in the survey averaged 3 hours: 40 minutes while those called “heavy viewers” rang up an astounding 16:26 — more than two-thirds of a 24-hour day — on average with media. Among tweens, the light users averaged 2:16 while a group dubbed “social networkers” topped out at 9:59 on average, considerably more than the heavy viewers’ average of 7:15.

The study, issued Nov. 4 by Common Sense Media, a children’s advocacy organization with offices in Washington, New York, Los Angeles and San Francisco, is a follow-up of sorts to a 2013 study called “From Zero to Eight,” which reported on media usage by the nation’s youngest residents.

Vicky Rideout, who designed the survey and wrote the results for Common Sense, said at a Nov. 5 briefing at which the results were unveiled that the survey did not take into account how much time with media was spent at school, where school districts have been joining the tech revolution and where students may be asked to read.

Rideout added there was no way to tell whether the time of amount teens and tweens spent “creating” online — typically the skinniest sliver on the pie-chart graphs that accompanied the study — came in the form of homework assignments. The survey said that, regardless of income level, teens will spend at least some time each week using the computer for homework, from 83 percent for teens in higher-income families to 66 percent for teens in lower-income households.

Children from minority groups, the study found, have less access to computers and smartphones, but those who do have them use them more than their white counterparts — more than 11 hours a day for African-American teens, for instance, compared to the 8:56 spent by teens overall.

Listening to music is still the favorite activity of children across in all age groups, although teen boys rank playing video games tops. TV watching jostles with listening to music as the top activity children enjoy “a lot” or say they do every day, and at least half of all children still watch TV live as it’s being broadcast.

Parents were not asked what they thought about their kids’ media use, but according to their kids, “more parents are concerned about the type of media content their children use than how much time they spend using it,” the report said. “Just over half — 53 percent — say their parents have spoken with them about how much time they can spend using media.” Healthier majorities report parents talking with them about staying safe online, when they can use media, the types of media they can use, and being responsible and respectful online.

All this time spent with media does not seem to have a negative impact on kids’ levels of physical activity. Roughly a third of all children say they are physically active every day, with another 40 percent-plus saying they’re active a few times a week. The average amount of time among those who say they are active clocks in at close to 90 minutes for both tween and tweens. Among all teens, the average time spent in physical activity is at least an hour a day.

“This study is a game-changer,” said Ellen Wartella, director of the Center on Media and Human Development at Northwestern University in Evanston, Illinois. “Technology and media is now like the air that kids breathe. It is part and parcel of what they do.”

NEXT: Movie review: Love the Coopers