Film charts the ‘Joy’ of success, and misery of sudden stardom 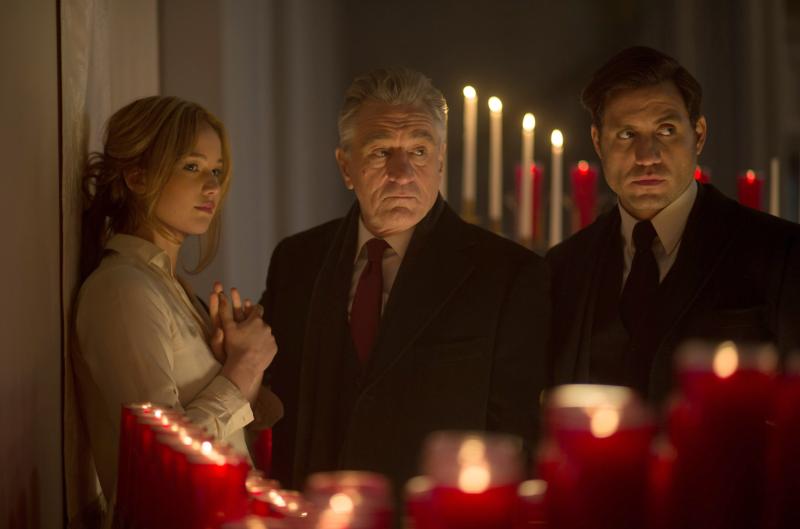 Jennifer Lawrence, Robert De Niro and Edgar Ramirez star in a scene from the movie "Joy." The Catholic News Service classification is A-III -- adults. The Motion Picture Association of America rating is PG-13 -- parents strongly cautioned. Some material may be inappropriate for children under 13. (CNS photo/Fox)

NEW YORK (CNS) — Not, perhaps, since Disney’s “The Sorcerer’s Apprentice” has the humble kitchen mop featured so prominently in a movie as it does in “Joy” (Fox).

That’s because this blend of comedy and drama is loosely based on the life of Joy Mangano, inventor of the self-wringing “Miracle Mop” — and a home-shopping network sensation.

Writer-director David O. Russell reunites the casts of his two previous films, “Silver Linings Playbook” and “American Hustle,” in weaving yet another madcap tale about a dysfunctional family hoping to hit the big time.

Unfortunately, that mop, made from a continuous loop of 300 feet of super-absorbent cotton, turns out to be far more interesting than the gaggle of human characters surrounding it. They’re too self-obsessed for their own good — or the audience’s.

Jennifer Lawrence plays the divorced mother of two who struggles mightily to keep a roof over the heads of four generations of her extended clan.

Tony (Edgar Ramirez), her ex-husband, lives in the basement. A lounge singer, he dreams of becoming “the next Tom Jones.”

And then there’s dear old dad, Rudy (Robert De Niro). A mechanic and tinkerer, he has always encouraged Joy’s creative streak, even after splitting from Terry. But, as a father, he’s an emotional train wreck with a succession of girlfriends.

His latest paramour, Trudy (Isabella Rossellini), is a wealthy widow and shrewd businesswoman. When she invites Rudy’s clan for an outing on her sailboat, Trudy unwittingly sets Joy’s creative juices flowing.

Wine glasses tumble to the deck, and Joy dutifully attends to the mess. As she squeezes the mop head, however, her hands are sliced open by shards of glass.

From pain comes gain. The self-wringing mop is born!

“Joy” barrels along at a manic pace as our heroine’s idea, bankrolled by Trudy, goes from crayon drawings to patents and manufacture. Ultimately, Joy lands a segment on QVC, the fledgling cable channel run by visionary executive Neil Walker (Bradley Cooper).

He takes a shine to the spirited inventor, who represents a reality check compared to his other brassy hosts (including the late Joan Rivers, portrayed by her real-life daughter, Melissa).

“In America, the ordinary meets the extraordinary every day,” Neil tells Joy. Within minutes, 50,000 Miracle Mops are sold, and a star is born.

But success is bittersweet, and in the end there is little cause for rejoicing in “Joy.” Dogged perseverance requires major sacrifices, and family ties prove a lot harder to hold together than the strands of a mop head.

The film contains domestic discord, mature themes and some crude language. The Catholic News Service classification is A-III — adults. The Motion Picture Association of America rating is PG-13 — parents strongly cautioned. Some material may be inappropriate for children under 13.

PREVIOUS: ‘Concussion’ reveals the traumatic risk of any given Sunday

NEXT: Almost-dead hero of ‘The Revenant’ rises from grave, bent on revenge