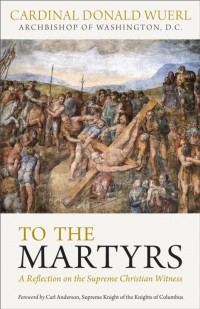 WASHINGTON (CNS) — For Christians, martyrdom remains a “never-ending story” that stretches from Scripture accounts of apostolic times to today’s “amphitheater of YouTube,” Cardinal Donald W. Wuerl of Washington writes in a new book.

It’s titled “To the Martyrs: A Reflection on the Supreme Christian Witness,” released by Emmaus Road Publishing.

Cardinal Wuerl has written extensively on the Catholic faith, including best-selling catechisms and books on the Mass and living the faith in today’s world.

The Greek root for the word “martyrdom” means testimony, and Pope Francis has called that act “the supreme testimony,” as Christian martyrs live and die for Christ, imitating his passion and death, and inspire new generations of Christians to follow Christ, wherever that leads them.

Cardinal Wuerl notes that from its earliest days, the Catholic Church venerated martyrs, sometimes building churches on the site of their deaths and always including their relics in altars, and highlighting their feasts in the church calendar. The names of several martyred saints are recited in the eucharistic prayers at every Mass.

All but one of the apostles who walked with Jesus and continued his work died as martyrs, with only St. John the Evangelist dying a natural death. The cardinal notes how the Acts of the Apostles tells the story of St. Stephen, the first martyr and the first disciple of Jesus to die for the faith, who in his death by stoning imitated Christ’s prayerful offering up of his life on the cross and also forgave those who killed him. Cardinal Wuerl writes that those first Christians shared Jesus’ life and “imitated it to the end.”

The witness of the martyrs helped keep the faith alive in the catacombs during ancient Roman persecution, and in the underground church of Eastern Europe and the Soviet Union during communist oppression.

Despite the atrocities of the Reign of Terror in revolutionary France, great saints like St. Therese of Lisieux and St. John Vianney arose in that land.

After a million people attended the 1984 funeral Mass for the murdered Polish priest, Father Jerzy Popieluszko, “historians believe that day was the beginning of the end for communism in Poland,” Cardinal Wuerl writes. He also notes that an estimated 1.2 million people were murdered over four decades in communist China in an effort to eliminate Christianity, but today there are an estimated 90 million Christians there.

Tertullian’s famous words, paraphrased today as, “The blood of the martyrs is the seed of the church,” reflects how the testimony of their lives and deaths has inspired the Catholic Church’s growth around the world through the centuries following Christ’s life, death and resurrection.

Tertullian, an early Christian writer from North Africa, in A.D. 197 wrote “Ad Martyras” (“To the Martyrs”), which inspired the name of Cardinal Wuerl’s book.

In the preface, Cardinal Wuerl notes that he writes on the topic of martyrs with a sense of urgency: “In many societies today, the utterance of a simple phrase, ‘I am a Christian,’ is a crime punishable by death.”

The cardinal recounts tragic accounts of contemporary Christian martyrs, such as the beheading of 20 Egyptian Coptic Christians by Islamic State militants on a beach in Libya in February 2015; and Islamic gunmen from Somalia storming a Kenyan university, separating Muslim from Christian students, then shooting Christians in an attack that left 147 dead. In India, Hindu extremists have murdered priests, raped nuns and burned Christian churches and homes.

Cardinal Wuerl writes, “I intend this book to be an act of solidarity with those who today are suffering for the Christian faith.”

He said that as a priest and bishop, he has heard personal accounts of the “supreme testimony” offered by martyrs, after meeting with refugees who survived Nazi and Communist persecution, and with those who in recent months have fled rampaging Islamic State militants in Iraq and Syria.

He also praises the witness of Christians in Iraq and Syria who have stayed true to the faith practiced by their ancestors in that land since the time of the apostles.

But he adds that at this juncture, the world too faces a choice. Cardinal Wuerl notes that too often, government leaders, the media and even fellow Christians have remained silent as Christians in other parts of the world face ongoing persecution and even martyrdom.

Cardinal Wuerl writes that U.S. Christians must remain vigilant in defending their religious freedom against government measures and a secular culture seeking to keep the practice of religion within church walls, and prevent people from living out their faith in the public square and remaining true to the church’s teachings.

The cardinal quickly points out, though, that such assaults on religious freedom are in no way equivalent to the religious persecution faced by Christians around the world, but both situations must not be regarded with indifference or ambivalence.

Cardinal Wuerl notes that in the 20th century, an estimated 45 million Christian martyrs were killed around the world. Silence, he adds, should never be an option in the face of such inhumanity, as the world today faces ongoing atrocities against Christians by the Islamic State, and when Boko Haram militants in Nigeria kidnap nearly 300 Christian schoolgirls, who vanished and soon also disappeared from the media’s news cycle.

“We must make it our mission to stand with those who are suffering today,” the cardinal writes. “We must stand in solidarity with them and re-echo their testimony to all the world.”

NEXT: Movie review: In the Heart of the Sea