Movie review: In the Heart of the Sea 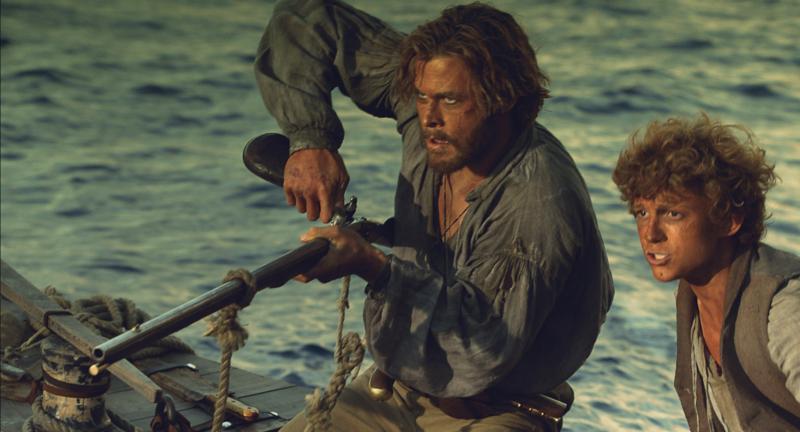 Chris Hemsworth and Tom Holland star in a scene from the movie "In the Heart of the Sea."(CNS photo/Warner Bros.)

NEW YORK (CNS) — With “In the Heart of the Sea” (Warner Bros.), the real-life events that helped inspire Herman Melville’s classic 1851 novel “Moby-Dick” become the basis for a polished and exciting adventure directed by Ron Howard.

Despite some grim plot developments and other material precluding blanket endorsement for any but grownups, Howard’s film will make fit and even valuable fare for most mature adolescents.

In adapting Nathaniel Philbrick’s eponymous history text, published in 2000 and subtitled “The Tragedy of the Whaleship Essex,” screenwriter Charles Leavitt sets out with ambitions as lofty as Melville’s own. “How does a man come to know the unknowable?” the novelist, played by Ben Whishaw, asks in the picture’s opening moments.

To find out, Melville has journeyed to Nantucket, Massachusetts, where he hopes to interview Tom Nickerson (Brendan Gleeson), the last survivor of the ill-fated — and already famous — 1820 expedition that proved to be the Essex’s undoing. But the haunted, alcoholic old salt is reluctant to open up about the harrowing experiences of his youth (during which he’s portrayed by Tom Holland).

The tale he eventually weaves is one of hubris and greed — whale oil was the primary fuel, and therefore one of the most valuable commodities, of the era — as well as deprivation and determination. At its center looms the bitter rivalry between the Essex’s aristocratic but inexperienced captain, George Pollard (Benjamin Walker), and its veteran first mate, the intrepid Owen Chase (Chris Hemsworth).

Driven by avarice, and by the mutual desire to be rid of each other, Pollard and Chase recklessly carry their vessel off to the remote, mid-Pacific feeding grounds where the relentlessly hunted whales, already absent from more accessible areas, are still to be found, so it’s rumored, in large numbers. There the ship meets its disastrous destiny as the result of an uncanny encounter with a leviathan of vast proportions and unusual ferocity.

While the picture falls short of its own sublime ambitions, it does reach the level of thoughtful, generally absorbing entertainment. And the imagery is frequently striking, as when a harpooned whale showers his hunters in a rainfall of the blood forcefully expelled from his blowhole. Other scenes evoke everything from a particularly good episode of the 1960s gothic soap opera “Dark Shadows” to an eerie maritime painting.

Howard and Leavitt maintain a light touch as the script deals incidentally with such religious themes as the power of prayer and the benefits of (non-sacramental) confession. Equal delicacy is observed in treating other heavyweight topics, especially a newborn sense of environmentalism voiced through a debate about man’s true status within — and proper stance toward — the natural world.

Although it’s no match for the masterful narrative with which it shares its factual source material, “In the Heart of the Sea” does represent accomplished moviemaking of a high order.

The film contains much stylized seafaring violence with brief gore, mature themes, including cannibalism and suicide, a fleeting bawdy image, about a half-dozen uses of profanity as well as a single crude and several crass terms. The Catholic News Service classification is A-III — adults. The Motion Picture Association of America rating is PG-13 — parents strongly cautioned. Some material may be inappropriate for children under 13.

NEXT: Book’s academic style makes for a difficult but worthwhile read