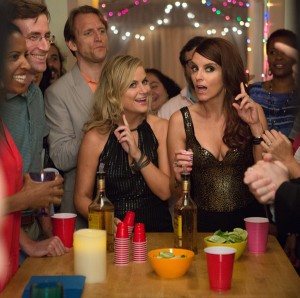 NEW YORK (CNS) — All those immature male characters who have made the overgrown boy a familiar figure on screen get a duo of feminine counterparts courtesy of the patchy comedy “Sisters” (Universal).

While director Jason Moore, working from a script by Paula Pell, apparently aims to make a point about the need to grow up, the movie he helms could hardly be more juvenile.

Though the 40-something siblings of the title, uptight Maura (Amy Poehler) and impulsive Kate (Tina Fey), are temperamental opposites, they’re bound by close ties — to each other, to their parents, Bucky (James Brolin) and Deanna (Dianne Wiest), and to their past. So when Mom and Dad announce that they’re selling the home in which Maura and Kate grew up, both sisters react with unrealistic outrage.

Their protests leave Bucky and Deanna unmoved, however. So it’s off to the otherwise empty house to clear out their childhood belongings. While doing so, the ladies strike on a plan to relive their glory years by using their former residence as the venue for a wild party for their friends from high school.

One agreed-on goal of the evening is to enable divorcee Maura to make up for her adolescent backwardness by having sex in the bedroom of her youth, something she neglected to do when opportunities were more abundant. Fortunately for this scheme, the gals have just crossed paths with hunky neighbor James (Ike Barinholtz), an obvious candidate for the role of partner in the proposed remedial romp.

Tone-setting incidents include Kate’s rereading of her youthful diary, which evokes fond memories of her heedless promiscuity, a married couple’s concealed act of public intercourse in the midst of the soiree and a slapstick accident for James that might require the attention of a proctologist. So much for any laughs, much less enlightenment, viewers might hope to eke out of the strained proceedings.

If “Sisters” is anything to go by, distaff dopiness of the “Peter Pan” variety turns out to have as little appeal as its masculine analogue.

The film contains misguided values, including a benign view of casual sex, drug use and artificial contraception, a nongraphic scene of aberrant sexual activity, much sexual and some scatological humor, several uses of profanity, pervasive rough and crude language and obscene gestures. The Catholic News Service classification is O — morally offensive. The Motion Picture Association of America rating is R — restricted. Under 17 requires accompanying parent or adult guardian.

NEXT: Star Wars: The Force Awakens