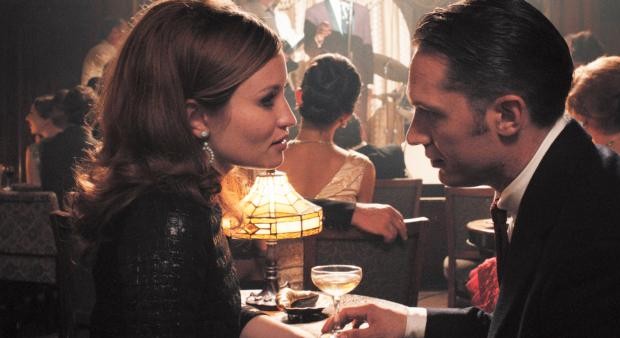 Emily Browning and Tom Hardy star in a scene from the movie "Legend." (CNS photo/Universal)

Initially interesting but quickly exhausted, this morally ambiguous descent into London’s underworld of the 1960s offers diminishing returns to those few mature viewers for whom it can be judged acceptable.

Helgeland draws on John Pearson’s 1972 book “The Profession of Violence” to dramatize the rise and fall of terrible twins Reggie and Ronnie Kray (both played by Tom Hardy). Famous in their own time — and the stuff of local folklore ever since — the Beatles-era heyday of these volatile gangsters saw them mixing with celebrities while carrying out a reign of small-scale terror across the British capital.

Oddly enough, the basic conflict around which the film is shaped is a familiar, almost cliched dynamic within purely fictional treatments of a life of wrongdoing: As vicious but stable ex-boxer Reggie falls for Frances Shea (Emily Browning), a lass from the siblings’ working-class neighborhood, she tries to reclaim him for decency. But psychotic Ronnie, whose release from an asylum was gained by threatening his psychiatrist, continually draws his loyal-to-a-fault brother back to the dark side.

Hardy delivers a remarkable performance, shuttling efficiently between glamorous bad boy Reggie and Ronnie’s eccentric persona in which the soul of a serial killer is strained through the manner of a snuffling bank clerk. As for the predictable interludes of wild violence, although graphic and intense, they are placed within a serious context.

Yet Helgeland does engage in some double dealing, inviting moviegoers to revel in the possibilities for uncontrolled mayhem simmering constantly below the surface. His script’s outlook on Ronnie’s homosexuality is equally ambivalent.

Ronnie’s ahead-of-its-time frankness about his inclination — which startles, among others, Angelo Bruno (Chazz Palminteri), a visiting emissary from Mafia kingpin Meyer Lansky — is poised as both comical and, implicitly at least, courageous. But his actual exploits, only cautiously shown on screen, are portrayed as just another dirty strand in a vast tangle of corruption.

The young men Ronnie keeps with his ill-gotten gains have no genuine feelings for him. And when high ranking government officials, most prominently Conservative peer Lord Boothby (John Sessions), get mixed up in his lascivious doings, their waywardness becomes a means of thwarting Scotland Yard.

After merrily playing the game of asking, alternately, “Isn’t this terrible?” and “Isn’t this terribly fun?” — a gambit which plays both on the audience’s ethical strength and on their countervailing weakness — Helgeland suddenly shifts gears at the last minute by having Frances, who serves as our narrator throughout, solemnly inform us that there is no real morality to be found in the world.

Such nihilism, however, is not in keeping with the overall tone. If it were, the Krays’ outrageous behavior would lose its ability to shock, an effect on which the picture consistently depends.

All these elements require that viewers come to “Legend” equipped with the safeguard of a well-developed, Gospel-immersed conscience — as well as a willingness to undertake the detailed work of moral discernment. Yet the tedium into which Helgeland’s sluggish account lapses, after the first half-hour or so, will make this necessary exercise of vigilance feel like largely unrewarded toil.

The film contains brief but gruesome violence with considerable gore, a discreet portrayal of perverse actions and decadent sensuality, mature themes, including suicide and homosexuality, at least one use of profanity and pervasive rough and crude language. The Catholic News Service classification is L — limited adult audience, films whose problematic content many adults would find troubling. The Motion Picture Association of America rating is R — restricted. Under 17 requires accompanying parent or adult guardian.

NEXT: Immature “Sisters” attempt to relive their high school years