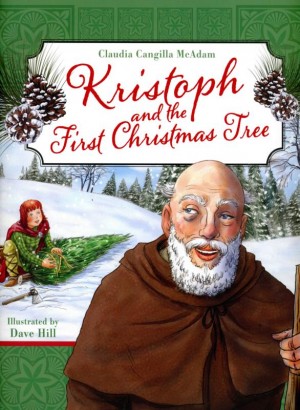 This is the cover of “Kristoph and the First Christmas Tree” by Claudia Cangilla McAdam. The book is reviewed by Regina Lordan. (CNS)

WASHINGTON (CNS) — The following books are suitable for Christmas giving:

Sylvie is a girl from Burkina Faso who is eager to go to school but cannot because she is tasked with the daily chore of fetching water for her family. It takes all day to carry the water from the river three miles away, leaving her no time for learning in a classroom. But with the help of aid workers from Catholic Relief Services, a well is drilled in her community, dramatically changing her life. American children might have a hard time relating to and understanding how CRS’ development and aid projects around the world help answer Jesus’ call to solidarity with the poor, but “Drop by Drop” will help children see how the church works to make lives better. Younger readers will enjoy “Green Street Park,” a book also by the U.S. Conference of Catholic Bishops, about a group of young students inspired by St. Francis to clean up their neighborhood park. Ages 6-10.

This beautifully illustrated missal invites young children to become active participants in the Mass with its simple description of the parts of the Mass. The missal does not seek to explain the mysteries, liturgies or the consecration, it only takes the child step-by-step through the parts of the Mass. The book also offers a few prayers for children. Adults can read the book to young ones before attending church, helping the children to recognize what is going on around them, and older children can take the book with them to Mass to help them understand what they are observing. Ages 3-7.

Bimba Landmann brings to life with colorful and intriguing illustrations St. John XXIII’s decalogue of how to live each day humbly, politely and lovingly toward God and others. Affectionately known as “the good pope,” St. John wrote guidelines that are obtainable, direct, sweet and simple enough for children to follow. The hardcover book is a keepsake that will open the discussion about this pope who courageously had saved the lives of Jews during the Holocaust and was canonized by Pope Francis in 2014. Ages 4 and up.

Saint books for children might seem like a dime a dozen, but a few stick out. This one certainly will with its bright watercolor illustrations and inclusion of lesser-known female saints, such as St. Genevieve and St. Hildegard. Each passage includes a description of the saint, illustration, reflection and prayer. Children will also get the opportunity to read about soon-to-be saints, such as Blessed Teresa of Calcutta. Ages 3 and up.

This illustrated hardcover book will give children an introduction to and reaffirmation of the significance of Mary in Catholicism and praying the rosary to ask for her intercession. The passages include stories about how the rosary came to be, the many ways to pray the rosary and stories about the saints and the rosary. Ages 6 and up.

Brother Giovanni was a happy monk who loved to bake. He enjoyed his simple role as baker at the monastery until he was tasked to teach a group of unruly students their prayers before an important visit from the local bishop. But the joyful monk was unsuccessful at being stern and could not control the rowdy bunch. One night it dawned on him to bake his way to success, and Brother Giovanni made little rewards out of salt and dough called “pretiolas” to entice the children to learn their prayers. Alas, the boys and girls couldn’t resist the “pretiolas,” that we now know as “pretzels,” and they learned their prayers just in time. All readers will enjoy this fun story and beautifully illustrated hardcover book. Ages 4-8.

A young boy, a priest and one powerful blow to an oak tree begin this legendary story of how the first Christmas tree came to be. Children will enjoy the detailed illustrations and exciting story about how a group of pagans were shown the power of God by the strength of St. Boniface. The story explains why the evergreen tree is a part of the Christmas tradition and includes a prayer based on the words of St. Boniface. Ages 4-6.

Children can learn about one of the church’s newest saints by reading this illustrated hardcover book. Pope Francis, during his trip to the United States in September, canonized Junipero Serra, a Spanish missionary who evangelized native Americans along the California coast. St. Junipero’s journey was difficult and at times seemingly impossible, but he felt called to spread Catholicism despite the exhaustion and dangers. His life story is one that Pope Francis has called an example of a “tireless missionary.” Ages 6 and up.

This board book, sturdy enough for the smallest hands and quick enough for the shortest attention spans, is the perfect story of Christmas for toddlers. Sweet illustrations and simple text will engage little readers. Also in this series is “Our Father” by Maite Roche. Ages 0-3.

Lordan, a mother of three, has master’s degrees in education and political science and is a former assistant international editor of Catholic News Service.