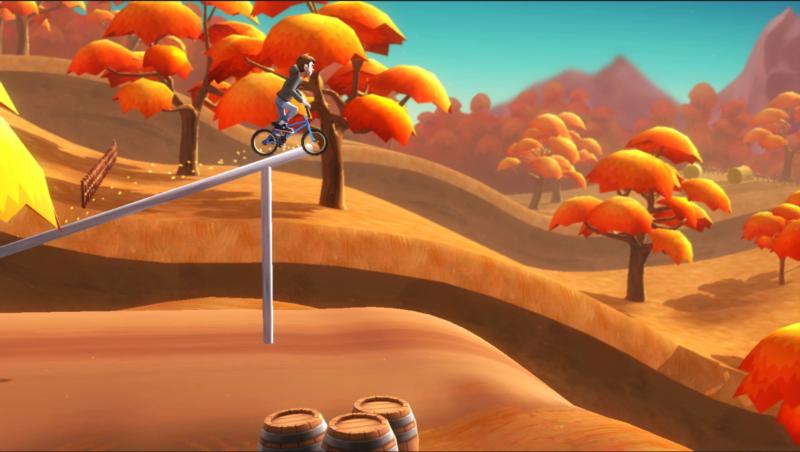 This is an image from the video game "Pumped BMX." (CNS photo/Yeah Us!)

NEW YORK (CNS) — Video games have been accused of contributing to the problem of obesity in America since they keep players idling indoors instead of being active outside.

But some pastimes, for at least some people, really are better pursued virtually — and at home — rather than attempted in real life.

For adolescents — or adults, for that matter — interested in the sport but wary of its hazards, “Pumped BMX” (Yeah Us!) offers a fun, abrasion-free alternative to the real thing. The game is playable on mobile devices and all gaming platforms.

With only the mildest representations of violence, and no sexual content, this is a title parents can feel comfortable including on their gift list for teens.

Gameplay passes through a series of environments within which a skillful alternation of acceleration and jumping enables backflips, handlebar spins and other maneuvers that boost the score — and look really cool as well. It’s a good idea for all players to take the tutorial before attempting a flip — back or front — or a can-can. (If nothing else, “Pumped BMX” will help gamers learn the subculture’s lingo.)

There are five levels of difficulty to choose from. Though they don’t take weeks to master, players will definitely feel challenged: Even the fairly simple first level requires patience as the ramps become more circular and the cliffs sheerer.

In style and structure, “Pumped BMX” resembles “OlliOlli,” the hugely popular and ingenious skateboarding game. Together, these titles may signal a hopeful trend toward games that offer plenty of fun but are largely mayhem-free, contests pitting players against obstacles rather than drawing them into bloody shoot-’em-ups.

“Pumped BMX” doesn’t boast the cinema-quality graphics or involved plots and subplots of games like “Assassin’s Creed” or “Star Wars: Battlefront.” But the price point is under $10, making this an enjoyable, wholesome and affordable stocking-stuffer.

The game contains some cartoonish violence. The Catholic News Service classification is A-II — adults and adolescents. The Entertainment Software Rating Board rating is E 10 + — Everyone ages 10 and up.

NEXT: Jesuit professor explores good, bad and ugly about church’s past