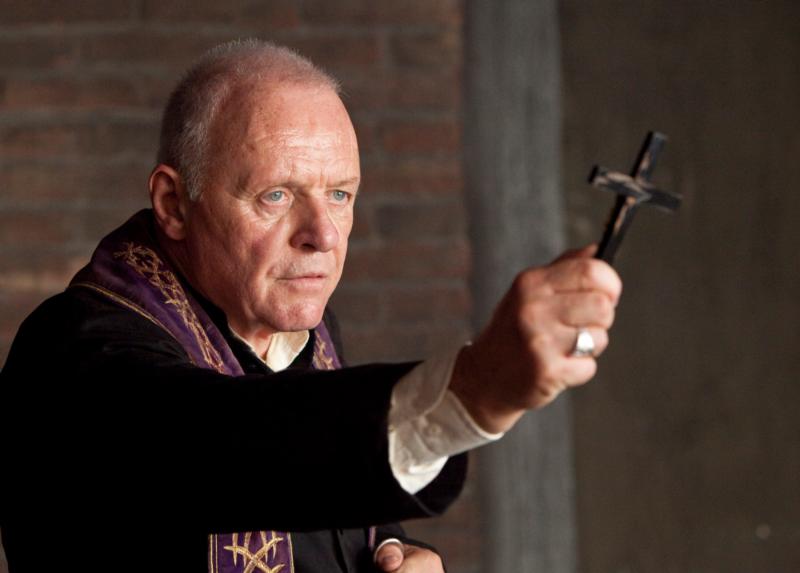 Anthony Hopkins stars in a scene from the 2010 movie "The Rite." Writing in a Vatican newspaper, a leading exorcist said movies depicting exorcisms could be an important medium for showing how God always triumphs over evil, but instead they misrepresent the faith and exaggerate human and satanic powers over God. (CNS photo/Warner Bros.)

VATICAN CITY (CNS) — Movies depicting exorcisms could be an important medium for showing how God always triumphs over evil, but instead, they misrepresent the faith and exaggerate human and satanic powers over God, a leading exorcist wrote in the Vatican newspaper.

Television and cinema have accustomed people to recognizing “the presence and extraordinary acts of demons in people’s lives and the battle that the church faces against them,” wrote Father Francesco Bamonte, president of the International Association of Exorcists, headquartered in Rome.

Portraying exorcisms in the world of fiction “could promote greater awareness” about the Catholic faith, however, “the way in which evil, demonic possession, the prayer of exorcism and liberation are presented is disappointing and unacceptable,” he wrote in L’Osservatore Romano Jan. 8.

While priests are entrusted by the church to help protect or liberate people from the power of the devil, most movies hide or ignore “the marvelous, stupendous presence and work of God” and the role of Mary in the battle against evil, wrote the priest, who is a member of the Servants of the Immaculate Heart of Mary.

As exorcists witness through their own experience, the reality is that “the demon, even if he doesn’t want to, is forced against his will to affirm the truth of our Catholic faith,” he said. For example, he said, when holy water or a holy relic is used in an exorcism, demons react — often violently — as they are forced to submit to the power of God every single time.

“When listening to a prayer to the Virgin, (the demon) shows all of his hatred and fear toward her, he is forced to confirm that Mary is the mother of God and that she intercedes for humanity,” Father Bamonte wrote.

While there are many inaccuracies about the faith in films, their most serious error is presenting life as a battle between two equal principles or divinities: light and darkness, good and evil, the priest said.

“Satan is not the god of evil against the God of the good, rather he is a being who God created as good and who, with some angels — also created good by God — became evil because they refused God and his kingdom with their free and final choice.”

Nor is it true, as some movies make it seem, that salvation comes from people who have access to secret or superior knowledge, he said. Such portrayals not only help drive people away from the church, they set the foundation for “a class of superior beings.”

People “who live with trusting abandon in God’s arms are stronger than the devil and all of his minions — these truths do not emerge in the movies,” he said.

“What could have provided a good service to the church and the faith becomes the usual and subtle attack of Satan against the foundations of the Catholic Church,” the priest concluded.

Father Bamonte’s article appeared in the Vatican newspaper together with a film critic’s look at how the exorcism genre was the most “prolific” in the evolution of “B movie” horror flicks.

William Friedkin’s 1973 movie “The Exorcist” is still today “one of the most terrifying horror films ever created,” according to Emilio Ranzato, author and frequent movie critic for L’Osservatore Romano.

Linda Blair, the young actress who plays the 12-year-old possessed girl in the film, “ends up being a kind of Shirley Temple debased by the era of Vietnam and Watergate,” he wrote.

While “no film in recent years has come close to reaching the same level” achieved by Friedkin’s masterpiece, “fine commercial productions” include “The Last Exorcism” by Daniel Stamm in 2010; “The Conjuring” by James Wan in 2013 and “Deliver Us From Evil” by Scott Derrickson in 2014, Ranzato wrote.

“In order to find good films on the subject of demonic possession,” he wrote, it’s better to skip more commercial productions and instead look at “art-house” films which are more at liberty to go beyond simplistic storylines and “the generic battle of good against evil.”

NEXT: For a horror movie, ‘The Forest’ isn’t very scary