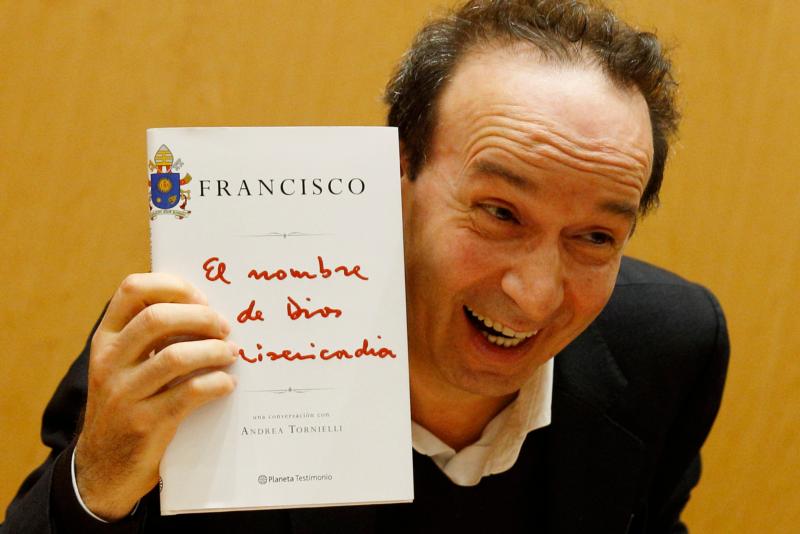 Italian actor Roberto Benigni holds a copy of the book, "The Name of God Is Mercy," during its presentation to journalists in Rome Jan. 12. The book is compiled from an interview Pope Francis did with Italian journalist Andrea Tornielli. (CNS photo/Paul Haring)

VATICAN CITY (CNS) — Arms flailing, the exuberant and perhaps hyperactive Italian actor and comedian Roberto Benigni described Pope Francis as a masterful minister of God’s mercy, which is always active and always on the move.

Benigni brought the house down Jan. 12 during the presentation of the new book-length interview with Pope Francis, “The Name of God Is Mercy.” The actor read excerpts of the book, but also offered his own reflections on mercy and bubbled over with praise for Pope Francis.

When he received the call asking him to participate in the book launch, Benigni said, he was told, “‘His Holiness would like’ and I said, ‘Yes!’ without letting them finish. I’d do anything — be a Swiss Guard, drive the popemobile — absolutely anything for this pope.”

“Mercy,” Benigni said, “is not a virtue that’s seated in an easy chair. It’s an active virtue, one that moves. Just look at the pope, he’s never still. It moves not just the heart, but the arms, legs, heels, knees. It moves heart and soul. It’s never still.”

“I would have loved to be a priest,” he said. When he was small and people would ask what he wanted to be when he grew up, Benigni said, “I’d respond, ‘the pope.’ Because this response made everyone laugh, I understood I had to be a comedian. If they’d all knelt, I would (have tried to) be pope.”

Hundreds of people packed the auditorium of the Augustinian Patristic Institute across the street from the Vatican for the presentation. 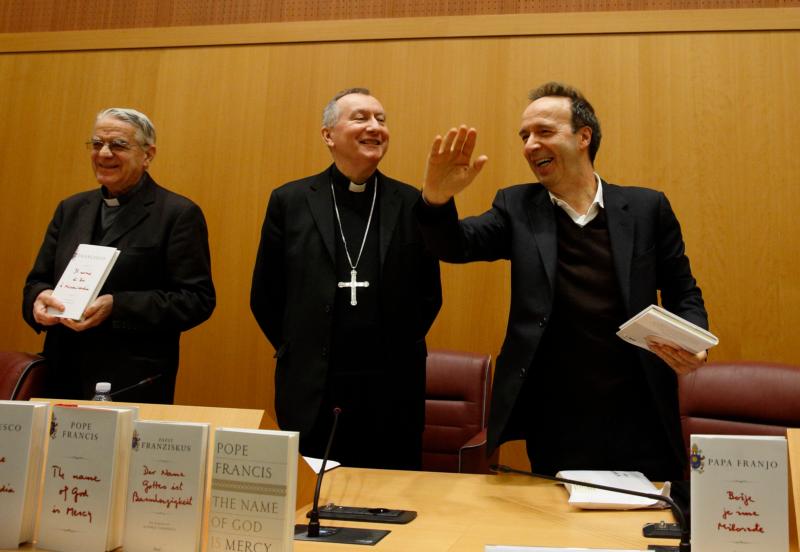 Jesuit Father Federico Lombardi, Vatican spokesman, said there is little doubt that mercy is a central theme of Pope Francis’ pontificate, but the book is not so much an explanation of mercy as it is an account of how Pope Francis has experienced mercy in his personal life, his priestly ministry and his own spirituality.

Cardinal Pietro Parolin, Vatican secretary of state, said that in the published conversation with journalist Andrea Tornielli, it is as if Pope Francis wants “to take us by the hand and lead us into the great and comforting mystery of God’s mercy, a mystery far from our human logic and yet so desired by us pilgrims lost in this age of challenges and trials.”

Benigni told the people at the book presentation that Pope Francis clearly demonstrates how mercy is not a soft, saccharine virtue, but one that challenges people and has both social and political implications for the way it offers people a second chance and a helping hand.

Zhang Jianqing, an immigrant from China incarcerated in Padua, Italy, who took the name Agostino when he was baptized in 2015, was given leave to meet Pope Francis and share his conversion story at the book presentation.

Meeting and becoming friends with Christians who visited the prison, Zhang came to learn about Jesus and grew to love him. He hesitated converting, though, he said, because he already had decided that he should do nothing more in his life to hurt his family and especially his mother, a practicing Buddhist.

But his mother told him he must follow his heart, Zhang said. “God’s mercy changed my life.”