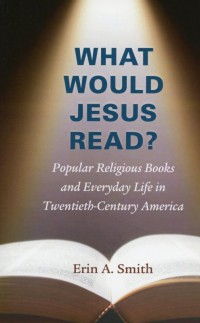 Several years ago, the “Left Behind” series of books, which described the fate of the earth and its inhabitants following the rapture, sold millions of books and made numerous best-seller lists. At the time, many commentators expressed amazement that religious-themed books would sell so well.

But as Erin A. Smith, associate professor of American studies and literature at the University of Texas at Dallas, describes in her comprehensive work “What Would Jesus Read? Popular Religious Books and Everyday Life in Twentieth-Century America,” this should have come as no surprise: Religious books aimed at a popular audience have been the backbone of the American publishing industry since the late 1800s.

The focus of Smith’s work is on those religious books that were looked down upon by scholars and theologians who complained that the books lacked aesthetic values, and were filled with theological and historical errors. Distained they might have been, but these books sold wildly among believers looking for stories that would strengthen their faith. Smith provides numerous examples of letters sent to popular authors that praised their work for making Jesus real for them.

Smith organizes her work chronologically, starting with the best-selling Social Gospel novels that promoted Christian missionary work among the poor and uneducated, moves to the self-help era of the 1940s-’50s, and then to “The Late Great Planet Earth” phenomena of the 1970s with its emphasis on end-times prophecy, into the modern day. While most of the books Smith addresses were intended for a Protestant audience, Bishop Fulton Sheen is included in the chapter that Smith describes as the self-help era.

In many of her chapters, Smith focuses on a particular author, as she does with Bruce Barton, whose 1925 book “The Man Nobody Knows” was a commercial success as well as a religiously inspiring book. Barton presented to the world a “muscular” Jesus, both a manly man and a strong business leader. According to Smith, Barton promoted both a “muscular” Christianity and a faith that provided strong support for capitalism. She also spends a great many words on the success of the Rev. Norman Vincent Peale and his work on positive thinking and the promotion of business from a religious perspective.

What the writers Smith studies showed is that the American audience is very interested in growing in faith, even if they are only tenuously connected to a particular church and religion. By providing us a detailed examination of the message presented and people’s response to that message, Smith helps us to better understand the spiritual hungers of the Christian masses. For that reason alone, this work will be of great interest to anyone interested in evangelization. The key is simple, bringing Jesus to life for the people of this time and helping them to identify with him.

One of the book’s strength’s is also a major weakness: Smith unpacks some books in such detail and provides so many examples of comments from readers that it is easy for the reader to get bogged down. While the books that inspired this work were written for the mass market, Smith’s work is seriously academic. While she has done a tremendous service to the field by this project, its readership will almost certainly be limited to a particular audience, which is unfortunate for it is worth the time and effort to read carefully.

PREVIOUS: Almost-dead hero of ‘The Revenant’ rises from grave, bent on revenge

NEXT: Not much to love in ‘The Hateful Eight’