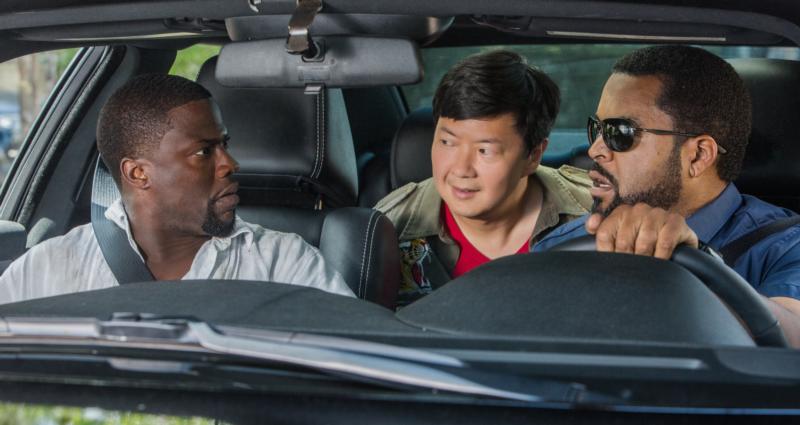 Kevin Hart, Ken Jeong and Ice Cube star in a scene from the movie "Ride Along 2." (CNS photo/Universal)

NEW YORK (CNS) — During World War II, when scarce supplies of gasoline had to be preserved for military use, a familiar government poster asked civilian motorists: “Is Your Trip Necessary?”

That same question might aptly be put to the characters who hit the road in the largely pointless comedy sequel “Ride Along 2” (Universal).

In following up on his 2014 film, director Tim Story benefits from a script — penned by returning screenwriters Phil Hay and Matt Manfredi — that tones down the original’s relentless vulgarity. At least in this case, however, an elevated vocabulary fails to carry with it a higher quotient of laughs.

Ben’s exploits in the last go-round have won him a tryout on the force. But easily exasperated James remains unconvinced. So he brings Ben along on a trek to Miami, hoping their investigation of a Florida philanthropist named Antonio Pope (Benjamin Bratt) — whose wealth may be based on underworld activities — will prove that the novice lacks what it takes.

Aside from kindling nostalgia for the hit 1980s TV series “Miami Vice,” and providing James with a love interest in the person of hard-driving Sunshine State detective Maya (Olivia Munn), the duo’s journey accomplishes very little.

It’s not a good sign that the dialogue’s closest approach to genuine wit comes with a joke that depends, for its full effect, on viewers’ memory of a popular soul single that rode the charts close to 45 years ago. Still, diehard Luther Ingram fans will no doubt be pleased.

The shootouts and explosions that pepper James and Ben’s sleuthing are all kept within stylized bounds. But there’s little of substance to be detected amid the flying bullets and slapstick chases.

Ben entreats James to give in to the bonds of family, enthusiastically dubbing their investigative partnership, “The Brothers-in-Law.” James remains unmoved, of course, though his love for Angela eventually motivates him to give Ben at least some grudging acknowledgement.

Slim comic pickings and paltry human interest suggest that all but the least demanding viewers would be well advised to skip this trip.

The film contains considerable gunplay and other violence, cohabitation, about a half-dozen uses of profanity and frequent crude and crass language. The Catholic News Service classification is A-III — adults. The Motion Picture Association of America rating is PG-13 — parents strongly cautioned. Some material may be inappropriate for children under 13.

PREVIOUS: Gripping ’13 Hours’ shows the Benghazi you thought you knew

NEXT: How did DeNiro end up in a sexploitation flick like this?