‘The 5th Wave’: Not even invading aliens are a match for teen angst 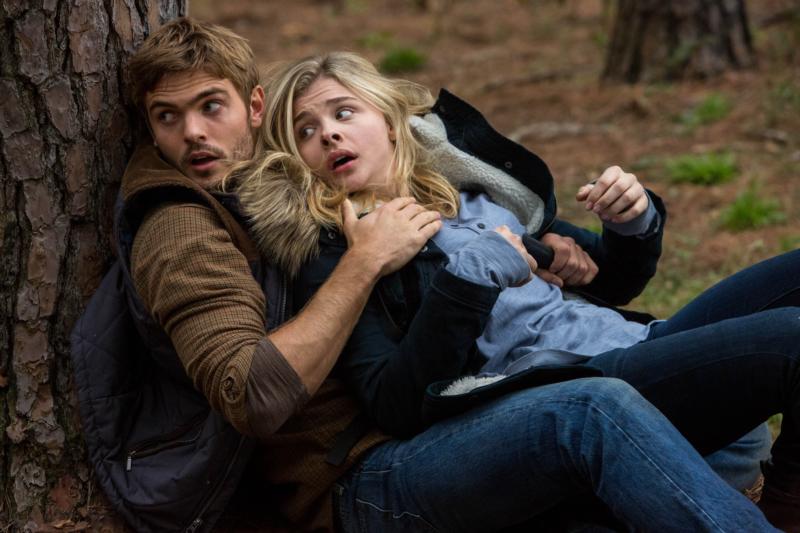 Alex Roe and Chloe Grace Moretz star in a scene from the movie "The 5th Wave." (CNS photo/Columbia)

The latest movie variant, “The 5th Wave” (Columbia), adds an alien invasion and adolescent tribulations to the mix. Neither element succeeds in boosting the novelty factor one iota.

Nevertheless, while this adaptation of Rick Yancey’s 2013 book isn’t distinguished by an abundance of originality — and is too harrowing for children and possibly some teens — its attempt to espouse a positive moral outlook can at least be applauded.

It would be easier to offer praise if the film’s upright values were less clumsily incorporated into the dialogue and if its premise didn’t feel undercooked and therefore like a random assemblage of multiple motifs. In particular, trying to mesh individual coming-of-age concerns with the decimation of the entire human race has a trivializing effect if not depicted just so.

A necessary ingredient in this crowded genre — sci-fi scenarios centered on imperiled youth — is a bold hero or heroine. Ohio teenager Cassie Sullivan, played convincingly with three parts glamour and one part grit by Chloe Grace Moretz, most definitely fits that bill.

A crucifix plays a significant role in the opening scene during which we see Cassie running through the woods wielding an automatic rifle and then scrounging for provisions in a convenience store that has been ransacked following some cataclysmic event. In voiceover, Cassie describes what has transpired since the day a gigantic spaceship descended and menacingly hovered over the planet.

As part of their slow, methodical attack on Earth, the Others, as the unseen aliens are called, have already wiped out millions by unleashing an electromagnetic pulse, earthquakes and floods as well as an avian flu epidemic.

Having survived these catastrophes, Cassie, her father, Oliver (Ron Livingston), and younger brother, Sam (Zackary Arthur), flee to a refugee camp. The arrival of Army forces briefly boosts their sense of security until Cassie and Sam become separated. Having vowed to protect her sibling, Cassie goes in search of Sam and risks being killed by the parasitic aliens who, in addition to felling people via drones, have adopted human form.

The first third of the movie taps into weighty existential anxieties and the story has a certain emotional plausibility. The prevalence of firearms and gunplay, especially involving children, is disconcerting. Yet it’s a realistic sign of the paranoia and panic that would likely arise in such circumstances.

Cassie’s determination not to fall prey to despair is admirable. Unfortunately, when she’s aided by two young men — a stranger named Evan Walker (Alex Roe) and, later, her high school crush, Ben Parish (Nick Robinson) — “The 5th Wave” tries to take on the romantic preoccupations of young adults and becomes increasingly unstable as a result.

Director J Blakeson creditably handles the action sequences and special effects. In dealing with the more intimate scenes, he has the advantage of working with the estimable Moretz as well as the seasoned Liev Schreiber, who plays Army Col. Vosch.

All in all, it’s not quite convincing enough, however. And so the way in which the stage is set for a sequel, and perhaps a third film to match Yancey’s planned book trilogy, feels premature and even presumptuous.

The film contains much violence, including some intense gunplay, potentially frightening images, a scene of underage drinking, an ambiguous sexual encounter, occasional profanity and adult banter as well as a few instances each of rough, crude and crass language. The Catholic News Service classification is A-II — adults and adolescents. The Motion Picture Association of America rating is PG-13 — parents strongly cautioned. Some material may be inappropriate for children under 13.

NEXT: Movie review: The Boy