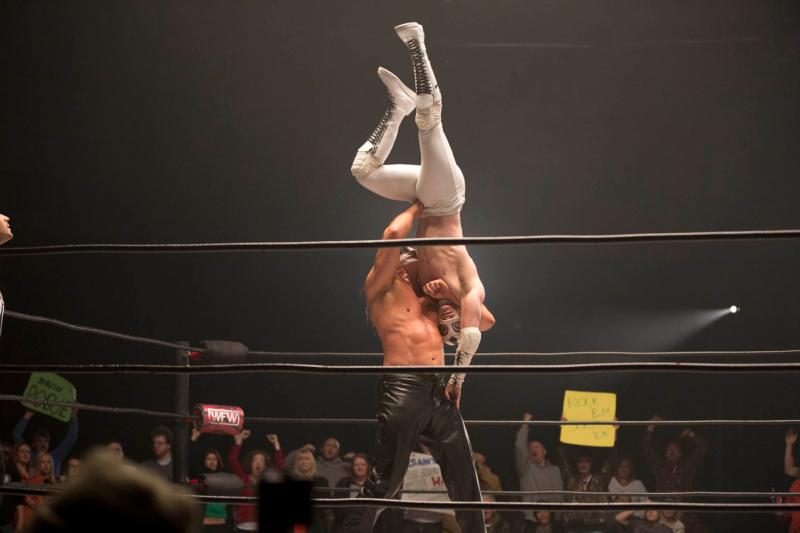 Brett Granstaff, white pants, stars in a scene from the movie "The Masked Saint." (CNS photo/Freestyle)

NEW YORK (CNS) — What’s a small-town pastor to do when his crumbling church in a crime-ridden neighborhood is desperately strapped for cash? Why, become a professional wrestler by day and moonlight as a vigilante, of course!

Brett Granstaff, who co-wrote the screenplay with Scott Crowell, stars as the grappler who, though he calls himself “The Saint,” does not take a straightforwardly devotional approach to his bouts. Instead, when he’s not busy securing his opponent in a chokehold or doing backflips, Chris kneels and gazes upward in mock prayer, as if seeking divine approval.

Having won the title, Chris decides to retire after one last match, much to the chagrin of sleazy promoter Nicky Stone (played by ring stalwart Roddy Piper). No one crosses Nicky, however, and it’s no accident when menacing rival The Reaper (James Preston Rogers), snaps Chris’ leg, making his career finale a painful, and seemingly permanent, one.

Not to worry — there’s a down-at-the-heels church in Michigan that badly needs new leadership. So Chris packs up his supportive wife, Michelle (Lara Jean Chorostecki), and precocious daughter, Carrie (T.J. McGibbon), and heads for the Great Lakes State.

He’s immediately faced with an impossible situation. The church is broke and in debt; attendance has fallen; the choir is tone-deaf; and one overbearing parishioner, Judd Lumpkin (Patrick McKenna), thinks he owns the place. Then again, as the congregation’s largest single contributor, in some sense, he does.

Michelle assures her husband that, as a veteran fighter, he’s up to the challenge. “The Lord never gives us more than we can handle,” she insists.

Chris finds another booster in Miss Edna (Diahann Carroll), an elderly parishioner full of wit and wisdom. Miss Edna also happens to be a rabid wrestling fan. So, when she learns the secret of Chris’ always-masked alter ego, she encourages him to re-enter the ring and earn money for the church.

Surprisingly, Michelle agrees. “Where in the Bible does it say ‘thou shalt not wrestle’?” she asks. Point taken, and soon Chris is deftly disposing of his adversaries once again, just like old times.

His newfound confidence is expressed in another, more disturbing way. As a self-appointed crime-fighter, he uses his wrestling moves to rescue prostitutes from their pimps and foil armed robbers.

It’s a dangerous yet seductive game, and before long Chris grows pompous and irritable, neglecting his family and congregation. Can Miss Edna strong-arm some sense into her pastor before it’s too late?

Sonoda provides viewers with fast-paced entertainment, ably juggling action in the ring with drama in the house of God. Good and evil are clearly defined, bad behavior is condemned, and characters who lose their way, and fail to find redemption, are served a heaping helping of just desserts.

The film contains some mild violence, wrestling action and a few mature themes. The Catholic News Service classification is A-II — adults and adolescents. The Motion Picture Association of America rating is PG-13 — parents strongly cautioned. Some material may be inappropriate for children under 13.