Catholics, Protestants and Muslims join in recovery from England floods 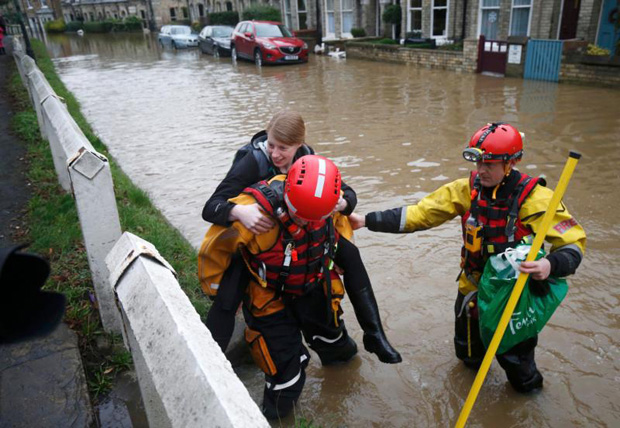 Members of the emergency services rescue a woman from a flooded property in York City Center in northern England. (CNS photo/Andrew Yates, Reuters) 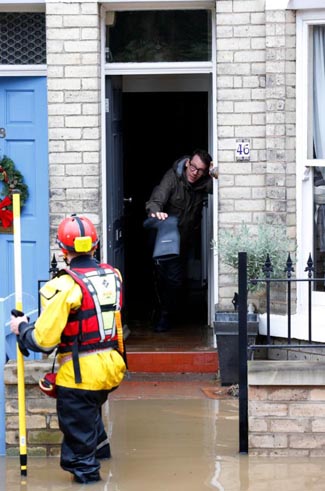 Rescue service workers evacuate a resident from his flooded home in York, England. Pope Francis called on Christians to pray for victims of several natural disasters that have hit parts of the United States, Great Britain and Paraguay. (CNS photo/Lindsey Parnaby, EPA)

MANCHESTER, England (CNS) — A 78-year-old Catholic priest trapped in his home was among those rescued as floods ravaged the north of England.

Elsewhere, another Catholic priest organized the rescue by boat of an elderly parishioner left stranded when a river broke its banks.

Father John Gott was in the kitchen of the rectory of the Church of the Good Shepherd in the Yorkshire town of Mytholmroyd when barriers to the River Calder collapsed and a wall of water crashed into his home.

The pastor suddenly found himself up to his waist in freezing floodwater but could not escape from the kitchen because the refrigerator had fallen against the door, blocking the exit. Rescue workers heard his cries for help, and he was pulled from the house soon after the incident Dec. 26.

Bishop Marcus Stock of Leeds told Catholic News Service Dec. 30 that the priest was “very, very frightened” and was now recuperating with relatives in nearby Halifax.

“For a man of that age you can imagine how traumatic it was for him, but he has managed to get over it,” said Bishop Stock, who visited the town Dec. 28.

The flood left the church and rectory “devastated completely,” the bishop said. He said the flooding was “very traumatic” for people whose homes were destroyed.

“The most distressing thing was to see people’s belongings on the streets,” Bishop Stock said. “They had to remove them because the water was contaminated with sewage.”

The floods have caused damage collectively estimated to be around 5.8 billion pounds ($8.6 billion). Rain fell at record levels across northern England throughout December; Scotland and Northern Ireland also were affected. The worst-hit areas were in northwestern England, in counties covered by the Diocese of Lancaster.

They included Honister in Cumbria, where 13.4 inches of rain fell in 24 hours Dec. 4-5 as Storm Desmond struck from the Atlantic.

Hundreds of families were evacuated Dec. 26 when rain arriving with Storm Eva caused widespread flooding across the North, including Manchester, Leeds and York.

Father Alan Sheridan, canon of St. George’s Church, said his city center parish was almost surrounded by water for two days. During that time he kept in contact with elderly parishioners and soon became aware that Mary Charlton, an 88-year-old widow, was trapped in her home by water from the River Ouse.

“I had to ring the emergency services and ask them if they could save her and, fortunately, they did,” Father Sheridan told CNS Dec. 30.

Father Derek Turnham, spokesman for the Diocese of Middlesbrough, which covers York, said that although Bishop Terence Drainey was in contact with the parishes there had been “no request or requirement to do anything at (the) diocesan level.”

The Diocese of Salford was also badly hit by the floods, with English Martyrs’ Church in Whalley swamped by the River Calder.

Father Philip Price, the pastor, said: “We got it badly. The floodwater just rose and rose and we were just stood there watching. There was nothing we could do. It was horrible.

“There was about two inches of water throughout the building,” he told CNS Dec. 30, “but it was enough to leave a terrible sludge of sewage. It’s just terrible.”

Worshippers have been given permission to use a neighboring Anglican church while the building is cleaned up, he added.

Practical ecumenism was also evident in the Lake District of Cumbria, in the Diocese of Lancaster, where Catholic, Anglican and Methodist leaders agreed to help each other, particularly with the use of church buildings, when any party requested assistance.

Father Tom Singleton, a priest serving in Cockermouth and Keswick, said that groups of Muslim men had also arrived from Yorkshire to help to clean up flooded areas after they saw the devastation on television.

He said the local Christian churches have a “really good tradition of working together” but that the involvement of Muslims was new.

“To have people come in, of their own volition, is something remarkable,” he told CNS Dec. 31.

In Carlisle, another Cumbrian town, the 600-student Newman Secondary School was lost to floods, and students will start the new year being taught from trailers in a field.

Father John Millar of Our Lady and St. Joseph’s Church, Carlisle, said the Society of St. Vincent de Paul was helping a number of families who were left homeless by the floods but had no insurance. The Religious of the Sacred Heart of Mary also were sheltering some elderly parishioners at their convent, Father Millar said.

Rain almost ruined the wedding of Laura and Will Park when water submerged access roads to St. Hubert’s Church in Dunsop Bridge Dec. 5. Under British law, they were obliged to marry in the church specified on the Marriage Register, so they could not hold the wedding elsewhere.

But the registrar allowed their pastor, Msgr. John Corcoran, to give them a blessing at a nearby church, as long as they took their wedding vows in St. Hubert’s on another day. The couple invited all their guests to the blessing and held a reception and party afterward, as planned.

The following day, Dec. 6, the water had subsided sufficiently for the couple to exchange their vows at St. Hubert’s, and their guests accompanied them, too.

“Obviously, it wasn’t how we intended to do it, but looking back it was perfect, absolutely perfect,” Laura Park told CNS Dec. 30.

Shortly after Storm Desmond brought the first wave of destruction, Pope Francis sent a message to Bishop Michael Campbell of Lancaster to assure him of his closeness and prayers “for those who have tragically lost their homes or been injured, as well as for their relatives and friends.”

On Dec. 30, the pope again encouraged Catholics to pray for the victims of floods in the United Kingdom, the United States and parts of South America. 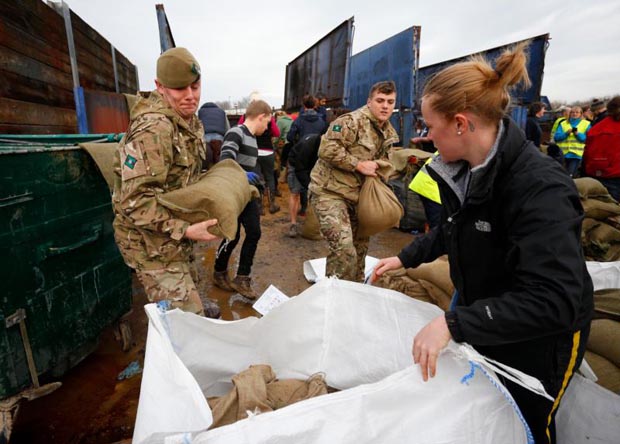